Art by local people on show at More London

Local mothers and older people in Southwark are showing off their creativity with an exhibition of their poetry and artwork on the hoardings near City Hall. 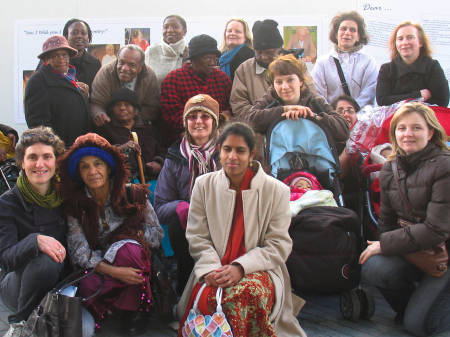 Until the end of January the hoardings around the construction site for PricewaterhouseCoopers' new HQ on the More London estate are hosting a free exhibition of artwork and poetry created by a group of international mothers (from refugee and other backgrounds) and older people in Southwark alongside a professional writer and artist from the creative arts charity Create.

Mothers at Bermondsey International Parents – a self-support group for parents of refugee and other backgrounds whose children attend local primary schools – spent six weeks working alongside one of Create's visual artists to paint images inspired by More London onto pieces of silk that they wove into a giant banner.

Older people from Stones End Day Centre on the Scovell Estate three weeks working alongside one of Create's writers to piece together poetry from their memories of living in the capital and snatches of remembered London songs; and the More London theme inspired members of Age Concern Southwark's Black Elders' Group to create stories and poems that looked back to a time before London was their home.

The work has been created as part of Create's More Creative project which adopts the urban landscape of the More London development north of Tooley Street as the stimulus for Southwark residents to explore their creativity alongside professional artists. Since its launch in summer 2006 more than 1,000 children and adults from all walks of life have taken part.

The exhibition was opened by the Mayor of Southwark, Cllr Bob Skelly, who said: "It was so good to see an exhibition that celebrates the creativity of people living in Southwark. I was really impressed with the artwork and poetry that I saw and I felt a great sense of pride from everybody I spoke to who had contributed to the exhibition. Create gives people a chance to experience the social and therapeutic benefits of the arts, and I think the work they are doing in the Southwark community is fantastic."

BIP participant and mother of three Elisabeth said: "Normally [in society] people stick to their different groups but this art has got mothers from all different cultures working as a team. I am not working at the moment because I have a young baby. I came from The Netherlands three years ago and I have felt very isolated. I am always in my house, cooking and cleaning and looking after the children.

"Create has helped me rediscover my passion for painting and made me start to do more art with my own children. The exhibition will be a nice reward for our work because we know that what we made is not going to end up in a cupboard somewhere. Lots of people are going to see what we have created together."

Stones End Day Centre manager Janet James added: "There are some people who come to Stones End who are quite quiet but sharing their stories and writing their poems has given a chance for their characters to shine through. It has proved to many of them that they can do things and they are really proud of what they have created."

• The exhibition can be seen in Unicorn Passage SE1 until the end of January 2008.