More than 100 of Southwark's volunteers and active citizens were recognised at a glittering award ceremony at the Hilton London Tower Bridge on Friday 7 March. 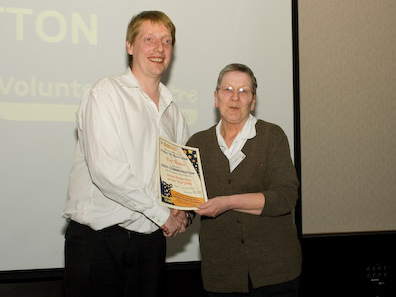 64 people were given 'Southwark Stars' Awards, each recognising over 100 hours of volunteering in the last 12 months. Collectively the Southwark Stars winners have have given an outstanding 19,698 hours of their time making a difference to the community.

Four of the Southwark Stars are from SE1 – Toni Day and Violet Banks of Southwark Sea Cadets, Di Trescher of West Bermondsey Community Forum and Alan Watling who is a library assistant with Lant Street-based Listening Books.

Patricia's work is based at the Queensborough Community Centre in Scovell Road. Patricia runs a weekly bingo club for older people and a pensioners' drop-in afternoon as well as organising outings in the summer months.

She was nominated by Ken Hayes who said "I can think of no one more deserving for this award than Patricia Notton."

Former local councillor Hilary Wines was high commended in the Citizen Govenor category for her work as a governor of Friars Primary School.

The Southwark Stars and Active Citizens Awards event was organised by the Active Citizens Hub, a project run by Volunteer Centre Southwark, supporting people to get more involved in action and decision-making in the community and work to bring about change.

"It was really humbling to see the amazing commitment that all these people are making to try and change things for the better," says chief executive Clive Pankhurst.

"This award ceremony was our way to say thank you to people who really are the glue of Southwark's society."