The Pajama Game at the Union Theatre

I don't like Musicals. Everybody has heard somebody say it. Most of us agree. Nobody likes Musicals. Until they see a good one. Cabaret, for instance, with its intricate storyline and unhappy ending, or Fiddler on the Roof, or West Side Story. 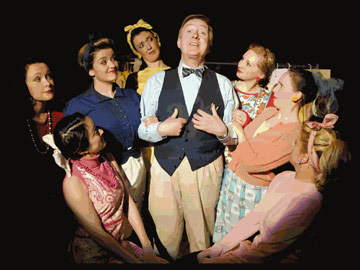 To get it perfectly straight from the start: The Pajama Game is not one of those musicals. In fact, this spick and span three-time Tony Award winning Broadway dazzler is exactly the kind of musical that makes people say they don't like musicals. It's just too sugary, too relentlessly cute and too dramatically dubious to be liked by any self-respecting London theatre goer. But to get another thing straight: its production at the Union Theatre is absolutely outstanding.

Over a decade of being wedged under a South London railway arch, the Union Theatre has learned to turn its lack of space into a virtue. Producer Sasha Regan's decision to bring The Pajama Game here was a stroke of genius. Take a big Broadway hit about finding love in a strike-bound pajama factory, cram it into a small London industrial space, and what you get, apparently, is a delightfully gritty cabaret-affair with overtones of sweatshop-work and genuine squalor. It's the very opposite of deadly theatre. Peter Brook would be proud (perhaps he is). Director Thom Southerland and choreographer Sally Brooks have taken great care to let each cast-member develop a distinct character, which enhances especially the dance performances in such a way that everyone seems intentionally out of sync with everyone else. Truly, effortlessly charming. Again, Cabaret springs to mind.

Emma Devonald's subtle and sophisticated set-design draws the audience right into the middle of the action. Cardboard pajama-templates dangle from the ceiling above the audience, all along a ground-level thrust stage that brings the performers within touching distance. The band, including a beautiful grand-piano with a honky-tonk edge to its sound, is partially concealed by an upstage clothes-rail. Effortlessly charming, once again.

Fate had it, I am obliged to say, that Kate Nelson, who is billed as the show's romantic lead Babe Williams, happened to be ill on the night. Taking her place was Stephanie Nielson, who usually plays the not-quite-speaking-part of Brenda. A lucky circumstance, it turned out, because Nielson seemed so insouciantly comfortable in her role; so finely adjusted to her character's emotional ups and downs, that it was impossible to imagine anyone else doing a better job. Her mere looks were those of the film star of a bygone age – not beautiful, not fragile, but teeming with quiet conviction and infinite confidence. She exhibited a capability in truthfulness that far transcended the shallow mold provided by the character of Babe Williams. Imagine Bette Davis ten years younger than we usually remember her, and probably a good deal taller. My discerning companion was, in fact, certain that it was Nielson's formidable height that had prevented her from being cast in the main role in the first place, because she did overtower leading man Graham Weaver by a head or two. But seriously: so what?! Any director who would overlook this gifted young woman is either a fool or considerably taller than her. The most amazing part of this success story – as a post-performance Gin and Tonic permitted me to find out – is, that Stephanie Nielson was not even a designated understudy. It took her no more than two nights of sleep-deprivation to learn the entire part of Babe Williams and perform it without the slightest hint of uncertainty. Quite simply amazing.

Noteworthy for its unusual nature is the ensemble's ability to let some of its members double up – not as stage performers, but as musicians – or is it the other way round? Thom Southerland, who also doubles up as a gin and tonic peddling barman during the show's interval, has a winner on his hands. This show brims over with quality performances from everyone involved. Each cast-member did a fantastic job and deserves to be mentioned here at great length and with many a laudatory adjective, but, alas, there is so little time. (Anyway, I would only end up saying 'effortlessly charming' again...)

What a luxury it is to be able to sit this close to the action of a Broadway piece; to practically be on stage oneself. This show – as has become a standard at the Union Theatre – lets you forget the murky distinctions between Fringe, OWE and West End. It is theatre as it ought to be and I'm sure last night's roaring full house would agree that every Broadway Musical should get the Regan/Southerland/Union Theatre-treatment at least once.

You don't like Musicals? Do yourself a favour and see The Pajama Game!