The Good Soul of Szechuan at the Young Vic

The Young Vic has been transformed for The Good Soul of Szechuan starring Jane Horrocks. 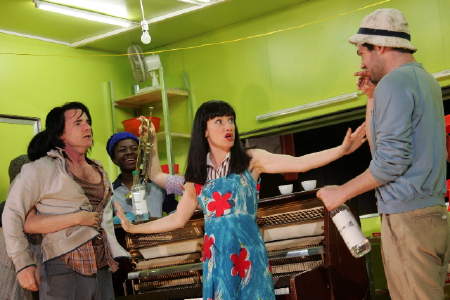 Entry into the auditorium is across the stage which for the opening of the play is a provincial Chinese cement works. Sacks are being sullenly stacked as you walk through a mist of dust. Once seated on the plastic chair you might notice that even the no smoking sign is in Chinese. The usher's pink uniform matches the workers' dusty overalls.

The Good Soul of Szechuan by Bertolt Brecht was written in 1939 and staged at the National Theatre almost twenty years ago. It has been called The Good Person of Sichuan and The Good Woman of Sichuan. The new title is for David Harrower's adaptation commissioned especially for the Young Vic and directed by Richard Jones.

Jane Horrocks plays Shen Te, a good and generous person, who is forced to live as a prostitute until the gods give her start-up money for a shop. Relatives swoop and almost succeed in turning the tobacconist into their personal Chinese laundry.

To survive Shen Te has to be tough but does so as a man called Shui Ta. This is the first time Jane Horrocks has played a male. We also hear her sing which is not a surprise. Shen Te disappears for long periods but Jane Horrocks must be on stage most of the time giving a strong performance. As a man she gradually becomes a fiesty woman.

John Marquez gives a chilling performance as the frustrated and domineering ex-pilot Yang Sun who cares more for his own fortunes than fiancee Shen Te.

The other star is Adam Gillen who as Wang the poor water seller stands out from the moment the play really starts.

This is an enjoyable battle between good and bad.