A lively production of A Midsummer Night's Dream continues this year's season at the Globe on Bankside. 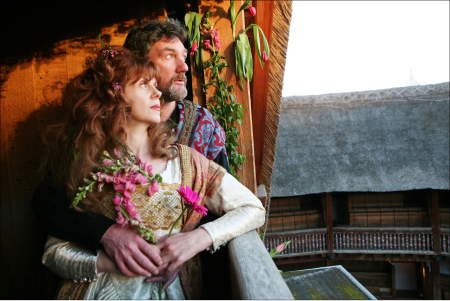 Directed by Jonathan Mumby, the actors speak the lines conversationally and best of all with greater clarity than has been the case in some recent productions.

These 'Athenians', dressed in dark costumes, seem to be both the voice of reason and reality but have 'something of the night' about them.

The zinging fairy world of Titania, Oberon and mischievous Puck (played by cheerily camp Michael Jibson) brings colour and energy to the production, as flower potions upset all the lovers. Titania's glorious rose-petal sofa where she embraces both her changeling child (in clashing orange silk shalwar and turban) and ass-headed Bottom is reminiscent of the lips sofa.

The third element of the play, the 'rude mechanicals' add to the surreal comedy as they try to rewrite 'The most lamentable comedy and most cruel death of Pyramus and Thisby' so as not to upset the audience. They stumble through their parts, including even the cues. Notable performances are by Michael Matus and Paul Hunter who both struts his stuff as Pyramus and enjoys the unexpected turn of events as he finds himself wooed on Titania's sofa.

Holding everything together is Olly Fox's music, performed on a variety of ingenious instruments. The rhythmic opening drum dance is cleverly reprised in various guises, as are the stately dances of Theseus and Hippolyta.

It is perfect of a summer night's entertainment; there is also a midnight matinee on Sat 21 June, Midsummer's night.