The Common Pursuit at the Menier Chocolate Factory

Gray's extensively celebrated tragicomedy follows a group of literary enthusiasts from the sunny Cambridge days of student idealism through an overcast adult life to a violent final cloudburst of collapsing dreams and its quietly melancholic aftermath. 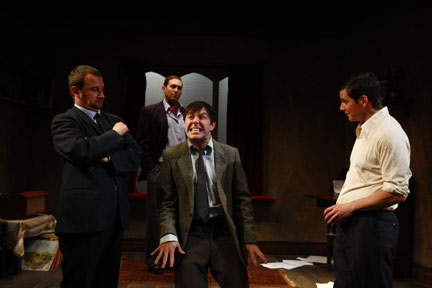 In the glorious and fateful year of 1968 five men set out to found and run a literary magazine, loosely orbited by a beautiful woman who, dramatically speaking, is little more than a plot-device.

For a young writer with similar (and stubbornly unresigned) ambitions, an objective assessment of this production's merits proves backbreakingly difficult. Anything that portrays youngish, tweed-clad, bespectacled men tousling their hair over loose pages of poetry, pushing around cardboard boxes full of unread manuscripts and sipping Gin and Lime while gloriously ignoring a landlord's eviction notice works as a sort of stylistic bribe. The story could well have been flat, the acting poor, the direction unloving, and still I left the Menier Chocolate Factory with a spring in my step. Nonetheless: through the haze of being charmed to bits, I espy substance.

The elegantly grumpy James Dreyfus was doubtless the star of the show – not just because of his star-portfolio, but because he managed to imbue the character of Humphry with a solid three-dimensionality and maintain it throughout; a task the rest of the cast found rather more difficult. This isn't their fault, though: it's Simon Gray's. The story itself leaves very little room for character development. There are no soliloquies, no twists, no attempts at achieving real depth. Even though the characters are made to analyse each other occasionally, the realisations they arrive at are the very things that make them characters in the first place. Let me venture the possibly outrageous proposition, however, that this doesn't really matter.

The lives we're invited to follow over three decades are those of infinitely enjoyable cardboard cutouts: Stuart, played soundly by Robert Portal, is your average, hornily monogamous Ted Hughes-style poetry-aficionado. His love Marigold, indisputably the weakest character (Gray is, after all, famous for his portrayal of middle-aged intellectual males...) is your typically bright but uninspired chirpy Cambridge totty, played exceptionally well by Mary Stockley. Martin is a goodnatured, gormless Toff with money and a love of cats. He is, although initially a weak character, portrayed with care, humility and finesse by Ben Caplan. Peter (Nigel Harman) is a handsome, talentless philanderer whose genius is spent on contriving ever new ways of cheating on his wife, Nick (Reece Shearsmith) is an unhealthy, unscrupulous tabloid hack whose success in the media world indicates its moral and qualitative bankruptcy, and the aforementioned Humphry, doubtless the play's most fertile role, is a saturnine philosopher whose miserly criticism of those around him constitutes Simon Gray's sole opportunity for profundity.

But, honestly: sod profundity! What better way to enjoy a glimpse of the lives of intellectuals than through the flattening lense of comedy? It's why we love Woody Allen, for example, or his Italian incarnation Nanni Moretti.

Its banality opens The Common Pursuit up to the jolly witticisms, jibes and academic inside-jokes that once rendered British humour the world's most refined, while getting across effortlessly one central, monumental message: for better or worse, it is our hopes and dreams alone that make life worth living.

Director Fiona Laird has done well to recognise the coarse nature of the play's humour, but one cannot help but feel that she should have gone against the grain of Gray's writing in this respect and worked more subtlety into the production. It seemed that she was so conscious of the unashamedly élitist, referential nature of Simon Gray's jokes that she felt they had to be emboldened in order to be understood – in short, to diminish Gray's élitism.

If this is indeed the case, Laird should not worry so: a Simon Gray play will only ever draw a Simon Gray audience. Those fine middle-aged academics Gray has spent most of his career portraying will flock to the chapel of their master to pay service to every subtle reference, while those whom the quips escape will look forlorn whether you wave a 'laugh now' – sign in their faces or not. Simon Gray is a niche-playwright who caters for what is practically a social fringe-group: people for whom knowledge is pleasure.

It is infinitely enjoyable to hear a lady in the fourth row bellowing with glee at a display of Oxford-Cambridge rivalry, or an elbow-patched Professor type chuckle at the snide mention of F. R. Leavis. Let these people have their fun, Fiona. Relieve yourself of the burden of having to bring Gray to the people. Otherwise, well done for a great production!

And by the way, set and costume are simply a feast for the eye. Anthony Lamble has contrived a beautiful stage, the main part of which slides from left to right and back to expose different settings. Stunning. Putting together the costumes, too, must have been great fun and a real headache at the same time. Watching the actors wear their way through three decades of spectacularly ill-fitting suits alone makes this production worth watching.

If you're a writer or a reader or an academic, or even academic-curious, or simply not scared by educational sophistication, please don't miss this production.