A 14-year-old boy is in a critical condition in hospital after he was stabbed in the Tabard Gardens area on Tuesday evening. 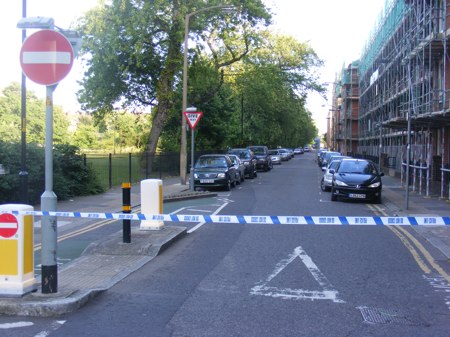 Tabard Street sealed off at the junction of Pilgrimage Street

A Metropolitan Police spokesman told the London SE1 website that officers were called to Great Dover Street just after 5pm on Tuesday to reports of a male youth with stab injuries.

The victim, believed to be aged 14, was taken by air ambulance to the Royal London Hospital in Whitechapel where his condition is described as critical.

Officers believe that the victim was involved in an altercation with a group of youths shortly before he was stabbed.

No arrests have been made and Southwark Police are continuing their inquiries.

Parts of Great Dover Street, Tabard Street, Becket Street and Tabard Gardens itself were cordoned off on Tuesday evening.

Great Dover Street was sealed off between Globe Street and Trinity Street.

Five buses on route 21 were banked up outside The Roebuck.

This is the third reported stabbing in SE1 in as many weeks.