Royal visit to Albert Embankment for reopening of maritime HQ

The International Maritime Organization HQ on Albert Embankment was officially re-opened by the Duke of Gloucester on Tuesday after a £62 million refurbishment. 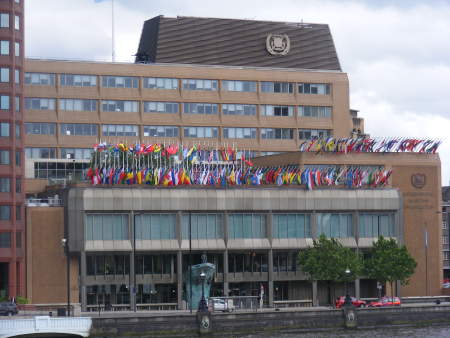 The IMO headquarters on Albert Embankment was purpose-built during the 1970s and opened in 1983 by the Queen.

A major refurbishment of the building was begun in mid-2006 and completed in April 2008.

The building houses a 320-strong Secretariat and hundreds of delegates from the Organization's 167 member states, three Associate Members and observers from a wide network of intergovernmental and non-governmental organizations who regularly attend meetings there.

"I am delighted, as a retired architect, to see that you have decided to refurbish your building as I know that having the right building, having the right facilities, makes it much easier to carry out complicated tasks, particularly in this era of rapid communication," said the Duke of Gloucester.

"So I am delighted to play a role in the history of your maritime Organization by declaring your refurbished home officially open."

Shipping minister Jim Fitzpatrick added: "Not only do we now have a building that the international delegates can enjoy, long into the future, but together we have built a 'home' for the IMO of which we can all be proud."

In total more than Ł62 million has been spent on the 20-month refurbishment project, which has seen the building undergo a massive transformation. Although largely unchanged externally, internally the changes are dramatic.

More than 90 per cent of the total project cost was met by the British Government, from which the building is leased by the IMO.