More than sixty little black dresses, some famous, feature in a new exhibition at the Fashion & Textile Museum. 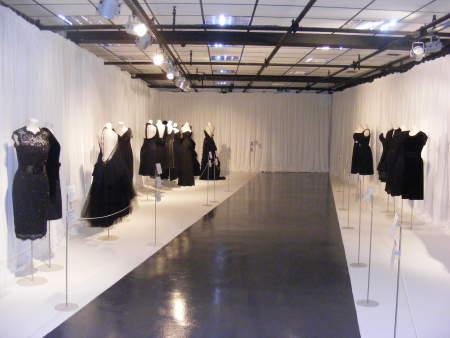 Many are from the collection of fashion designer Andrew Fionda and other examples have been lent by designers and celebrity owners. All are displayed against a backdrop created by stage designer Michael Howells.

"When I travel I always pack a little black dress" said supermodel Erin O'Connor who opened the exhibition. "It's like a blank canvas which can be dressed up or down, whatever the occasion. I think when you buy your first LBD, it's a sure sign that you've grown-up."

In 1926 Coco Chanel produced a simple black jersey dress which she described as 'the new uniform of modern women'. Vogue nicknamed the dress the 'Chanel Ford' predicting it would be as popular and accessible as Henry Ford's Model T Car.

Included in the show are seven dresses from the Seventies by museum founder Zandra Rhodes. Her 1978 version is worn with a pink jersey mask.

The first dress Barbara Hulanicki made for her Biba shop in 1964 was a little black dress and this had a huge influence in spreading the wearing of the garment not just across the classes but across the day. In the Fifties it had been largely confined to middle class girls attending cocktail parties. A 1970 Biba example is on display.

Travel writer Martha Ellen Zenfell has lent the dress she bought for Ł1 in Portobello Road and then wore in the Moroccan desert, at a New York club opening, in the Royal Box at the Royal Albert Hall and at a funeral. "This little black dress has never let me down" she says.

Joanna Lumley has lent her Jean Muir dress which she claims "transformed her life utterly". Others loaning their own dresses include Joan Collins, and Anouska Hempel. There are some surprises such as Grayson Perry's latex dress.

Andrew Fionda says: "My whole fashion career seems to have been highlighted by the little black dress and I think this is testament to its longevity. It is ageless, can always be reinvented and there will always, through one's life, be an occasion to revisit this fashion and style icon.

"Whilst curating the exhibition l was amazed at everybody's unique interpretation of the LBD, to some it is long and dramatic, to others it's short, sexy and sassy, whilst some think it's cute and very simple. However, to everyone, it's a fashion staple, a must have in everyone's wardrobe and a lifetime investment that will never let the wearer down."