Police are appealing for information after a Tunisian man was murdered in the Old Kent Road on Monday night. Old Kent Road remained sealed off all day on Tuesday. 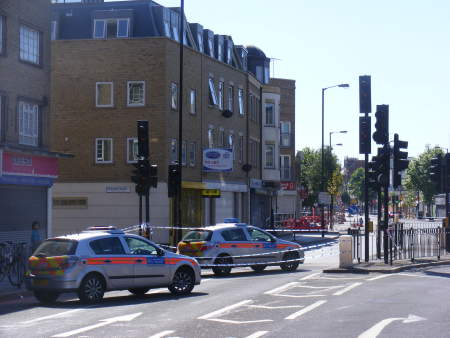 The victim has been identified as Hamouda Bessaad, 34, of south London. He was a Tunisian national.

The case is being investigated by the Homicide and Serious Crime Command, based at Putney, led by DCI Colin Sutton.

DCI Sutton says Mr Bessad was stabbed in the street and his death may have been related to an incident earlier in the evening.

"I am appealing for anyone who was in the LAN exchange and internet cafe, at 268 Old Kent Road, on the evening of Monday 30 June to come forward," says DCI Sutton.

"It is just 200 yards from where the victim was found, near the Total garage.

"Did you see anything of an incident when a young black African man was ejected from the premises, following a row, during the course of the evening?

"Were you around the area at all that night and did you see a group of four to five black African youths, possibly in their late teens hanging around?

"Did you see or hear anything suspicious?"

At this stage, police are keeping an open mind as to the motive.

A police spokesman says that two men – aged 42 and 29 – were arrested in the area on Tuesday.

They were taken to a south London police station, where they remain in custody.

Old Kent Road was sealed off between Dunton Road and East Street all day on Thursday, causing severe traffic congestion on surrounding streets including Tower Bridge Road and Grange Road.