The Mikado at Union Theatre

The Mikado is widely regarded as the most popular of Victorian operettas, epitomising as it does the light comic style of which Gilbert and Sullivan are undisputed masters. 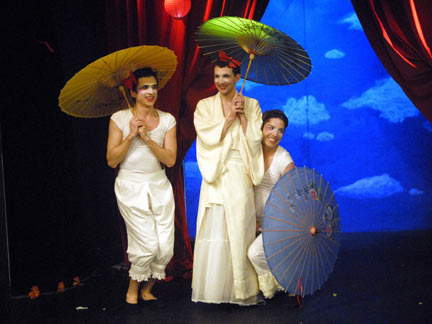 Its plot is characteristically twisted, but the drama, briefly, revolves around the wishes of the Lord High Executioner of the town of Titipu to marry his ward, Yum Yum who unbeknownst to him has fallen in love with Nanki Poo, the son of the great Mikado himself, but in disguise. In their attempts to resolve the situation, various town personages attempt to come up with creative solutions to this problem, among which are various threats of dire punishment including execution and being buried alive. Of course all is satisfactorily, if rather eccentrically resolved in the end.

It is a convoluted plot, but this wonderful production was trim and slim and neatly camp in a very endearing way, with plenty of the sharp edge of Gilbert and Sullivan's biting humour showing through the pretty kimonos and parasols.

An outstanding cast treated us to their gorgeously rich voices, Martin Milnes as Yum Yum quite taking my breath away in 'The sun whose rays are all ablaze' in the opening to Act 2. The acting matched the singing throughout superbly and in the 'love' scene between Ko Ko (Christopher Howell) and Katisha (Samuel J Holmes) which was so beautifully judged, it would be hard to better their skillful comic timing. Jacob Chapman's energy in the role of an arrestingly sinister, but very funny Mikado was also outstanding.

Having an all male cast added yet another wickedly, thinly disguised layer to the already flimsily disguised Victorian British, and allowed the cast to exploit to the full the comic potential of the roles. At times this exploitation almost overshadowed the plot, but how enjoyable it was for the nuances and allusions that Gilbert and Sullivan are so loved for to be so richly mined!

The use of piano alone as accompaniment worked well in this tiny space, poised as it was on the edge of a sumptuous looking stage complete with strung lanterns and red velvet curtain. The stage was exploited to the full, every inch and edge of it full of whirling characters almost spilling into the laps of the audience who, based on their enormously appreciative response, wouldn't have minded in the slightest! I loved the very clever choreography making use of ridiculous flower stems and fans combined with flamboyantly silly and camp gestures which were executed with perfect timing by the ensemble.

This production shows us delightfully why G and S were so revered by other composers and audiences alike, and for an evening of delight and sheer comic pleasure, a night in this particular Town of Titipu cannot be bettered.