Malaysia Week 08 has opened in Potters Fields Park with a display of exotic dancing and fashion. 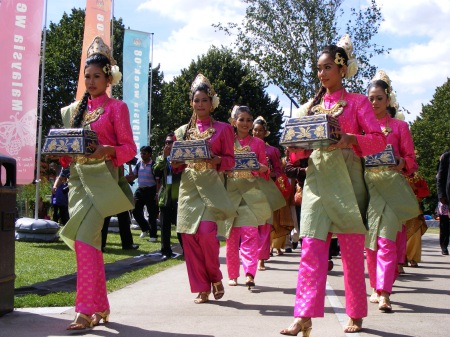 Dancers in the park 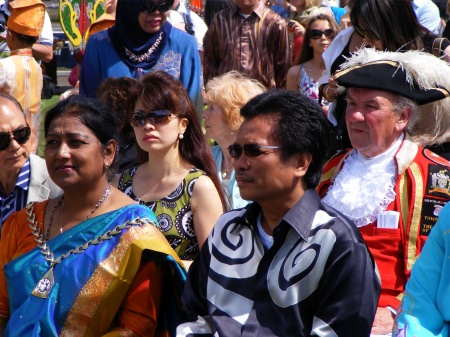 Mayor of Southwark, the Minister and Town Crier Peter Moore 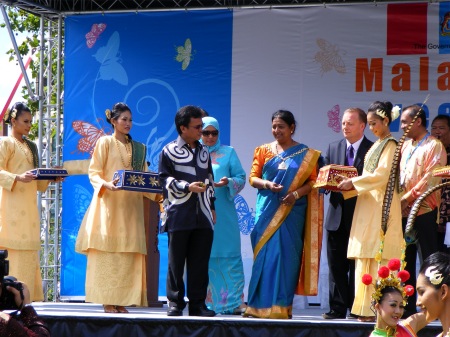 As part of the opening ceremony Mayor of Southwark Eliza Mann was offered a casket of saffron rice to sprinkle on the festival ground.

"We share a great deal in common with Malaysia as a tourist destination," said the Mayor during her speech of welcome from the outdoor stage on Wednesday morning. "Like Southwark, Malaysia has a diverse multi ethnic, multi religious and multi language society. For us both 1963 was a turning point in our history: Malaysia becoming a unified state and Southwark being created from three metropolitan authorities. We have both continued to develop."

Dato' Seri Mohd Shafie Apdal, Malaysian Minister of Unity, Culture, Arts & Heritage, said: "Potters Fields Park is an exciting place being surrounded by London's two most prominent landmarks, Tower Bridge and City Hall. We believe this offers the right ambience. When the idea of Malaysia Week was first conceived there was never any doubt where it would be held. It was always London."

Present among the craft and food stalls is S Amin Shahab who is adding the view from Potters Fields to his kilometre long sketch. This is already in the Malaysian Book of Records as the longest pen drawing on canvas.