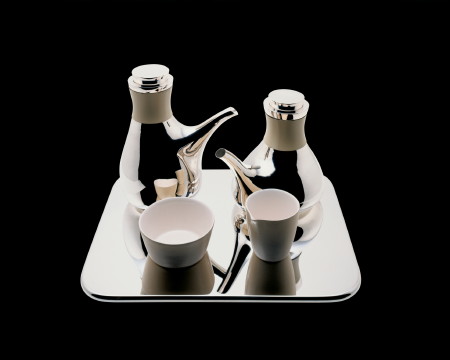 The exhibition begins at the time of the Great Exhibition in 1851 and revisits the great design exhibitions of Europe and America before returning to London which is again claimed as the world's leading centre for design.

But it is still a surprise to find a William Morris stained glass window in the entrance. Most advanced are the Christopher Dresser claret jug and teapot.

Vienna 1908 is dominated by Adolf Loos and the Thonet chair. For Paris 1931 the museum displays its wooden Le Corbusier car. By 1987 the focus is on Tokyo with names such as Nissan and Olymus.

What would London exhibit is a 2008 Great Exhibition? Featured suggestions include a Paul Smith suit. A screen displays Zaha Hadid's design for an Acquatics Centre although, like her proposal for Southwark Street, it might never be built.

Design Cities, organised by the Design Museum in association with Istanbul Modern, was first seen in Turkey this summer.