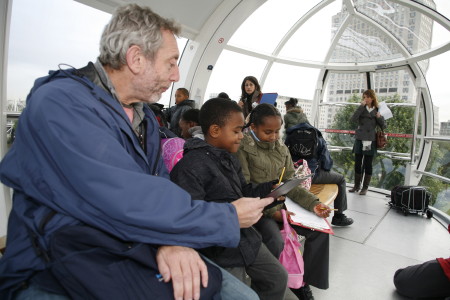 Children's Book Week is taking place from 6 to 10 October with events across the country. This year's theme is Rhythm and Rhyme.

On Monday 250 local children – including pupils from Waterloo's Johanna Primary School and Friars Primary School in Southwark – were invited to take a flight on the London Eye with Michael Rosen.

Children's Book Week is in its 77th year and is always held in the first full week of October. Free teachers' packs, including Booktrust's Best Books guides, arrived in all state primary schools, public libraries, special schools and initial teacher training institutions in England in June.

Friday is National Bookstart Day which celebrates the programme which gives three packs of free books to every child in the UK to encourage parents and carers to share books with their children from a very young age.