Knock Against My Heart at the Unicorn Theatre

This fable, designed for audiences aged 14+, is collaboration between Brazil's acclaimed Theatre Company Nos do Morro and London's Theatre Centre. 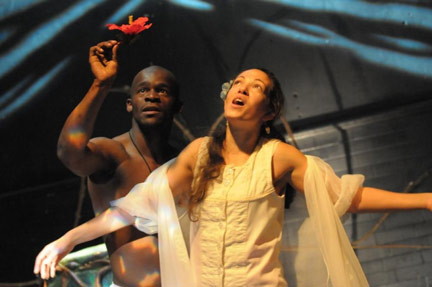 The storyline of the play is drawn loosely from Shakespeare's storm and shipwreck play The Tempest, though it's action also reflects on urgently pertinent ecological and political issues, such as water shortages due to the redirecting of rivers for irrigation which has often, if not alwayshad disastrous effects for indigenous people. However, unlike Shakespeare's play, the romantic angle in this instance is between the powerful and greedy landowner's Prospero's lovely young daughter Miranda and Caliban, who, in this case represents the heart of soul of the indigenous Brazilian people.

As this family play is only 60 minutes in length, its action must be succinct enough to get playwright Agbouluaje's points across clearly and quickly. And this it accomplishes, initially thanks to the marvellous physicality and acting abilities of William De Paula as Caliban. When the play begins, we see De Paula as Caliban, perched atop a mountain, overlooking the city. This effect is enabled by Roma Patel's imaginative set design, (and Rob Pepper's building of it) featuring a small city of multi-coloured windowed dwellings, set in the side of a 'mountain' which doubles as a seat and small performance platform, with its houses becoming steps as the need arises. Another portion of the set, on the opposite side of the performance space, as if the mountain and town offered its view, is a wooden structure, which despite its sparseness is still suggestive of the porch of Prospero's house. In between these two pivotal features, is a cloth circle on the floor, with terrain like features, and a mound of wood and flowers representing Miranda's favourite tree.

Andre Santinho makes a strong, tyrannical Prospero, keeping vigilant watch over his daughter Miranda, dreamily played by Mariana Whitehouse, defending what he sees as his right to steal the water supply of the poor in order to further irrigate his already flourishing farm lands. Whitehouse shows off her considerable dancing skills in her role as well as frequently exercising her beguiling voice. As Prospero's brother Antonio, Dani Machancoses is something of a marvel, seemingly improvising expertly in terms of speech and accompanying actions in order to reap the maximum amount of laughter from his lines. The gracefully athletic dancing of William De Paula is also something to behold, as are the physicality of Santinho and Machancoses as they create an impression of storm Tossed bodies, and many other effects which keep the play's scenes rolling along. Choreographer Fabio Santos has done an excellent job of triggering viewer's imaginations through the intriguing use of movement.

The action is set to Rio's singularly soulful favelas music, some of which is generated live by the cast members. Additional music is provided by Manuel Pinheiro and Stephen Hudson. Prema Mehta's Lighting Design further enables storm and sea related effects, as well as others.

On the evening we were there, an entertaining moment of interaction occurred when the lights went up and Santinho as Prospero encouraged the largely young teen and adolescent crowd to chant his name out in exchange for photocopied bank notes. There were also riveted looks on the faces of some audience members, particularly teenage girls, during romantic scenes between Whitehouse as Miranda and De Paula as Caliban, and likewise, on their male counterpart's faces when tension set in as Santinho as Prospero and Machancoses as Antonio took turns brandishing a pistol during their combative scenes.

The Unicorn Theatre offers a fantastic performance space, with plenty of room for the actors to interact and graduated seating on three sides. Its lobby is artfully decorated with puppets and a huge trademark Unicorn and the theatre also has a lovely bar with plenty of seating for pre-show and interval sipping and snacking. If you haven't been to the Unicorn Theatre yet, Knock Against My Heart presents a fine opportunity to gather your young teens together and make your way there for a good family night out.