At 7.40am on Thursday morning HMS Westminster passed through Tower Bridge for the start of a four-day visit to the Pool of London. 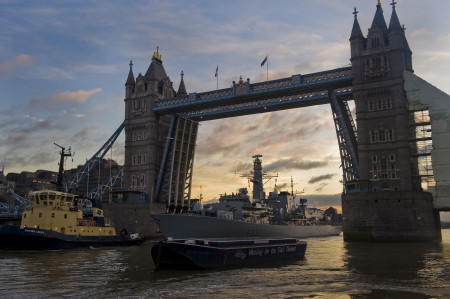 The Royal Navy Type 23 frigate and her 180-strong company are spending the weekend berthed alongside HMS Belfast.

On Friday the ship's commanding officer Commander Ken Houlberg called on a number of maritime and city organisations, inlcluding visits to the Tower of London, Trinity House, Port of London Authority, the Lord Mayor of Westminster and the Mayor of Southwark Cllr Eliza Mann.

On Sunday the crew will exercise, for the very first time, their right to march through the City of Westminster.

Culminating in a service at Westminster Abbey, the ship's men and women will march the route from Horse Guards Parade (starting at 8.45am) via Whitehall led by The Band of Her Majesty's Royal Marines.

HMS Westminster will leave the Upper Pool on Monday morning. Tower Bridge will lift at 11.05am as she heads out towards the Thames estuary.