Amazonia at the Young Vic

Amazonia is just one of a series of events created by British and Brazilian theatre-makers to commemorate the life of Chico Mendes, one of the first people to resist the deforestation of the Amazon Rainforest. 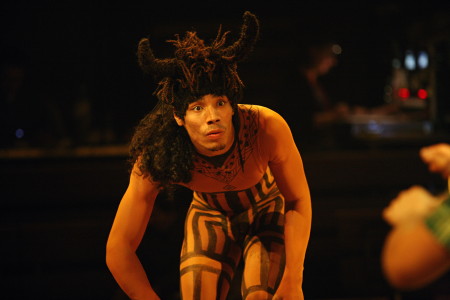 22nd December 2008 marks the 20th anniversary of his assassination. The performance is also the culmination of a 15- month journey of exploration and celebration of indigenous South American culture by the Young Vic and People's Palace Projects.

Following the narrative structure of traditional Brazilian folktale (Bumba Meu Boi), Amazonia traces the adventures of the villagers of Todos Os Santos and interweaves a universal environmental message with a distinct and dazzling Brazilian flavour. Designer Gringo Cardia must surely be commended for a daring and inventive set. It includes a towering symbolic tree structure reaching from stage level to ceiling and succeeds in playing a character within itself throughout the performance. Supported by three talented Brazilian musicians and some spectacular light and sound from Philip Gladwell and Dan Jones, a versatile and committed cast complete what can only be described as the evening's Amazonian spectacle.

Diogo Sales, having recently played the endearing dog in Two Gentlemen of Verona at the Barbican, makes a return to the stage playing the character of the bull (or 'boi' in Portuguese). His accomplished physical skill is a delight to watch and is matched by many of the other performers including Meline Danielewicz, who at one point executes a stunning aerobics display as she is suspended from the ceiling of the theatre. Jean Abreu's choreography is infused with fierce energy and emotion while Paul Heritage's direction works well within a sometimes difficult and challenging space.

Amazonia is an exciting and tangible production packed full of sharp wit, surprise and emotion. The environmental message at the heart of the piece is never imposed upon the audience; rather instead it is offered up for thought and consideration. As it caters for both child and adult, this promises to be the perfect theatrical event for the entire family over the festive season.