It’s Behind You! at the Union Theatre

It's Behind You is a pantomime for adults. Set in the town of Pantoville where all our favourite panto characters live like Buttons and Prince Charming, we find that most of our heroes and heroines are constantly drunk and high just to get through the day 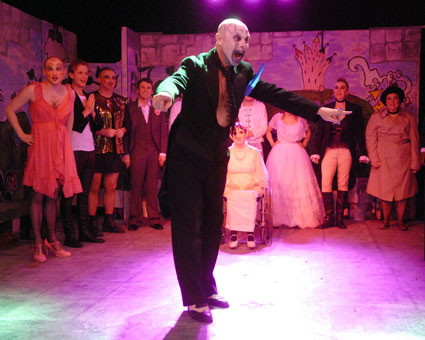 But then a stranger, Gary, steps in from the real world. He's a groom-to-be and has to find his pregnant fiancee Karen before the baby is born. When she stumbles into Pantoville, will they find each other and why are they there in the first place?

From the off, this is a camp, funny, festive treat. The Narrator (played by Phillip Lawrence) dons a Leigh Bowery get-up and coasts the audience along with fey humour and limp-wristed japes. The first laugh out loud moment comes when the Ugly Sisters, bearded and badly dragged, come out to the tune of 'Notorious' by Duran Duran.

But the fun doesn't stop there. Drag king Prince Charming (played by Victoria Jeffery) makes us squirm and giggle with his constant open lechery and cynical Cinders (played by Alison Edmunds) will have you remembering that the story of life doesn't end when the fairy tale does.

With all your favourite music from the 80s and a few great others, including Blue Monday by New Order, Too Many Broken Hearts by Jason Donavan and Filthy/ Gorgeous by Scissor Sisters, you'll be bopping in your seat and laughing along. The only criticism is the 'serious' songs that pop up throughout the play- they seem more of a convention than a necessity, but the company never miss a trick and pick up the pace before it gets too involved.

Be prepared to be picked on when it comes to the massive ball held in Pantoville- you may be required to dance with the actors!

Fast, funny and fierce, Lawrence's camp humour works well especially in this particular season. Is the thought of seeing your local panto making you wretch? Pop along to the Union Theatre and you'll see the reality and humanity in those characters. The conclusion is unexpected enough to keep you interested, but not bizarre enough to make you feel excluded.

Cynics, risk takers and those who believe in happy-ever-afters will be charmed and delighted by this original take on what the world of panto is really like.