More than 50 children took part in a concert at the Unicorn Theatre last week to showcase the work of community groups funded by Team London Bridgeâ€™s Small Grants Fund. 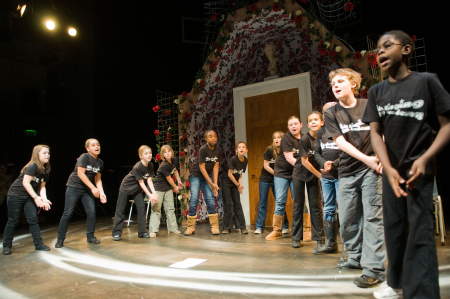 More than fifty children took part in the concert and displayed a variety of talents during a wide range of performances. The young actors and actresses from In Toto Theatre Company treated the audience to a rendition of Baba Yaga, a Russian folklore tale about a fearsome witch, the Southwark Sea Cadets showed off their drumming and bugle skills, Make Believe Arts put on a contemporary play about joining and fitting in with a youth theatre group and City Hope rounded off the evening with some festive songs.

Business improvement district Team London Bridge also runs a larger grants fund, Building Bridges. Last year two Southwark-based charities were awarded this funding. Both charities' projects were chosen because of their long term benefit to the community and their potential for building links between the area's business and residential communities.

The Southwark Mediation Centre received a grant of Ł12,000 which helped train up a group of 18 young people aged 16-19 to become mediators in their college and local area, using their skills to manage conflict where disputes or bullying might occur. They offer their service to all Secondary Schools in Southwark as well as addressing any cases of anti-social behaviour and conflict involving young people outside of school. The project has been so successful that the group has received no less than six awards since April 2008 and 93% of people who attended a mediation session felt that it had resolved their problem and ensured that nothing escalated.

The second charity, The Steam Industry, is the talented theatre group behind the annual free theatre season at The Scoop at More London. The Steam Industry's Building Bridges grant of Ł8,000 has been used to sponsor fundraising activity to support their educational work with young people in the Bermondsey area and helping develop new community outreach programmes. This year the Steam Industry performed Lorca's tragedy 'Blood Wedding' and 'Petite Rouge: A Cajun Red Riding Hood' – a New Orleans musical adaptation of Little Red Riding Hood.

The Building Bridges fund is currently open for applications from charities based in the London Bridge and Bermondsey area with ideas for long-term projects. The closing date for the Building Bridges fund is 29 January 2009. The Small Grants Fund is for applications of between Ł500 and Ł2,000 and is open between 2nd January 2009 and 27th February 2009. Email [email protected] or visit www.teamlondonbridge.co.uk/grants for more information on either of these funds.