Community: The Elephant & Castle exhibition at the Cuming Museum

The photographs are the work of eleven MA Photojournalism and Documentary Photography students at the London College of Communication at the Elephant & Castle. 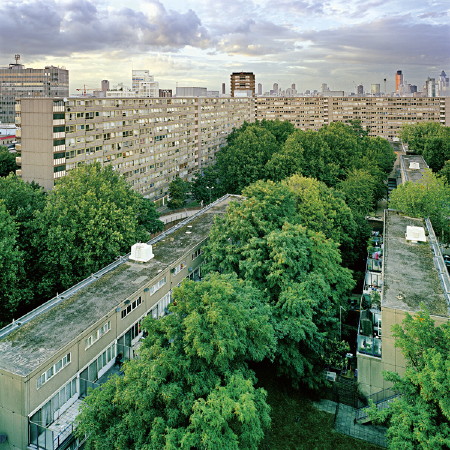 Year by year different students are documenting the changes in and around the area as the Heygate Estate is gradually boarded up and other buildings come down ready for the new Elephant. The college's Elephant Project director Patrick Sutherland says that his students were encouraged "to embrace a broad spectrum of approaches and to challenge existing notions of what constitutes documentary photographic practice".

London-born Kate Hooper stayed in the Elephant itself for her assignment discovering that the rush hour begins about 4pm and only ends at 8pm. Her pictures show self-absorbed people passing "like ships in the dark".

Most students were attracted to the Heygate. Tom King's portraits of a family on the Heygate Estate is called Una Familia. A Equadorian couple support their family by cleaning in central London in the tradition of earlier local residents.

Matteo Borzone has photographed all 350 garage doors on the Heygate showing that all now have a character of thier own. Anna von Shackelberg, who has worked in New York and is now based in Georgia, spent weeks leaning over balconies taking shots from above of Heygate gardens which are identical in size but also more varied than one might expect.

Jackie Dewe Mathews reports on over 500 families in temporary accommodation in her portfolio called Temporary. She found hard working families reluctant to leave the Heygate.

Those who have been persuaded to go might find the objects they left behind in Maximiliano Braun's pictures. He discovered a cushion, a shoe, a kettle and plenty of medication. Adam Patterson was there as the police arrived to oversee squatter evictions and Anthony Wallace was there as the empty flats were finally sealed.

Thomas Ball has the best overall picture showing how close this central London estate is to the Tate and Gherkin.

Eleanor Cleasby chose to dwell on architects' models of what she calls "a fantasy Elephant & Castle".

Jon Tonks, who has worked on a regional newspaper, looked at historic sites nearby. He shows a desolate Tesco car park in the Old Kent Road and reminds us that this spot was once called St Tomas a Watering. There people were often either hanged or welcomed to the capital.

These are important pictures of record by students who have already begun their careers working for national newspapers and magazines. It is, as suggested at the exhibition opening, a project which may run for more years than at first expected.

• A book of the photographs also called Community: The Elephant & Castle (Ł10), which includes a foreword by former regeneration director Chris Horn, is available at the Cuming Museum.

• The Heygate Estate is also the subject of an exhibition by Howard Read which can be seen this month at the Barbican Library in the City.