Val Shawcross AM spent Friday morning monitoring bus services in Grange Road after she received complaints from passengers on route 1 and route 78. 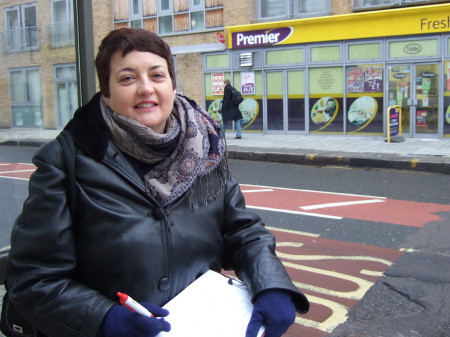 Val Shawcross AM in Grange Road on Friday morning

Labour's Val Shawcross, the constituency member of the London Assembly for Lambeth & Southwark, decided to see the problems for herself in Grange Road.

"What I saw fully supports what commuters have told me," says Val Shawcross.

"There were times when services were 'bunched' with more than one bus arriving at the same time, and when the buses were so full it was either impossible for people to board, or a few were allowed to squash on in very uncomfortable conditions."

She added: "What also became clear is that route 78 is not a reliable service. It's a small single decker service and the advertised frequency is 8-12 minutes but during the time I was at the Grange Road stop, I witnessed gaps of 16 and, astonishingly, a dreadful 32 minutes. Clearly this is not an acceptable level of service."

The London Assembly member will be reporting her findings to Transport for London with a request for more capacity and higher frequency on route 1 and measures to improve reliability on route 78 – which is one of the routes TfL are currently consulting on as part of their yearly service review.

Route 78 links Shoreditch and Nunhead via Tower Bridge and Old Kent Road and is operated by Arriva.

What's your experience of the Bermondsey bus service?