Thirty-somethings Anna and John live on the twelfth floor of a tower block with their twelve year old daughter Sam. Sam is spending the night with a friend for the first time and it is, apparently, also, the first time the couple have been alone for twel 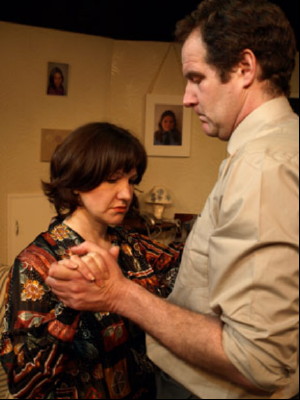 John's work friend, Bill has advised him to sit in the dark with Anna, in order to 'find a new way of looking at things', so he shuts the lights off, even though she's always been afraid of the dark. John attempts to seize the moment to remind his wife how sexually frustrated he is, but posh blonde Anna would rather talk about her ideal of creating a 'Swiss Chalet' feeling in their flat, soon to be enhanced by 'Swiss shutters' she has ordered for their windows.

However, now is not the time to explore either option, for they have a dinner engagement with the 'poorer', childless neighbours upstairs, and Anna gleefully intends to brag about all of the advantages she and John they have over them, including their daughter, Sam.
There is something acutely wrong with this production, in that two of its actors tend to stray in and out of character and one behaves as if she's escaped from a Pantomime. Only Gillian McCafferty manages to maintain an even keel to the offbeat presence, feeling and tone of her uneven character, Claire. Admittedly, Muir's ironically off-beat play would present challenges to any director, with its mix of stereotypes, oblique poignancy and garish humour. It's just unfortunate that this production's director, Ben de Wynter, who is also a Magician, wasn't able to locate and mine the tawdry magic imbedded between Muir's twisted lines. The resulting performance seemed more like a 'live' television show, than either life, real or surreal, or a valid theatrical experience.

Having said all of that, there are some admittedly laugh out loud moments in this performance, though at times even they seem as pick n mix as the rest of the production, with inane moments following on too quickly after target hitting ones, which might have been savoured a bit more. Playwright Muir sometimes exhibits a genuine handle on the way couples tend to speak to each other, and there are some moments when his verbal jibes hit their targets, especially when Ms. McCafferty is part of the scene. After the fellow sitting in front of me left at the interval, I was able to observe the on again, off again shenanigans of Act II's dinner party at even closer range from my seat in row two. My final analysis was that it was not only the directing, but also the script that alternately limped and, too infrequently, kicked. This is patchwork work which could be reworked, but there are some sections of this script that are simply, implausible, and the other elements of the production are just not strong enough to enable long-term suspension of disbelief, despite them. The ending of the play is far too predictable, so much so that we'd predicted something very similar ourselves during the interval, and there was nothing in the acting or language of the play, either verbal or bodily, to elevate it above the hum-drum.

Designer Holly Best has overdone the photos of the adolescent girl on the walls to such a repetitive point that they almost seem like wallpaper. This erroneously sets up the notion that either one or both of Sam's parents are neurotically over-attached to her. Other than that, apart from the multiple, identical Buddhas clumped together on one shelf, which lent a jumble sale feel to what is meant to be a 'posh' couples' flat as in London's 'new landed gentry' (as one elderly gentlemen had termed the upwardly mobile, affected accent set) the living room, divided in two, with a 'poor man's 'dining room (mismatched seating, etc) in which the upstairs couple of lesser means are meant to dwell, on the left seems apt.

The opening of the play which included some very clumsily executed lighting, during which they're 'in the dark' was meant to be occurring on the first night Anna and John have been alone together in twelve years, which, given their supposed high income levels, seemed instantly implausible. During the course of this wavering production, I was in the dark myself, for the most part, struggling, not only against its lack of credibility, but also, its overall likeability, and dark comedy is, admittedly, one of my favourite genres, theatrical or otherwise. By the end of it in the case of this production, however, I must confess that I didn't really care about the characters or the outcome of the play. Over the years, I've seen many fine productions at the Union Theatre, but unfortunately, this isn't one of them.

This light-weight production suffers mainly from its weak directing, which, makes the ambivalent premises of its script seem even more uncertain. As the performance drew to its predictable close, I couldn't help but see visions of Swiss cheese before my eyes, so full of holes was this production.