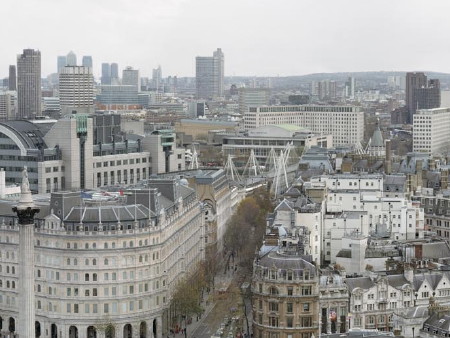 They are part of Michael Collins' ongoing series London Cityscapes photographed from high vantage points on a plate camera but in the tradition of the topographical views drawn in the early 19th century.

A shot with sharp detail from the top of Tower 42 not only looks down on the Royal Exchange and Cheapside roof gardens but also embraces the Millennium Bridge and Bankside.

Nearer the ground, but still high enough for unfamiliar views of familiar places, are photographs taken at both the north end of Ludgate House looking across the old railway and at the south end looking towards Palestra and new housing in Bear Lane.

Another shots show City Hall seen from the top floor of a City financial institution and Waterloo Bridge from above Trafalgar Square.

Michael Collins has recently recorded the cityscape changes around St Pancras Station and will shortly be showing new pictures of Battersea Power Station.

London Cityscapes by Michael Collins is at City Hall, until Thursday 14 May; admission free.