Artist Peter McDonald - whose 37-metre-long artwork adorns the outside of Southwark Underground Station - has also designed a set of badges worn by staff which passengers can collect by striking up a conversation. 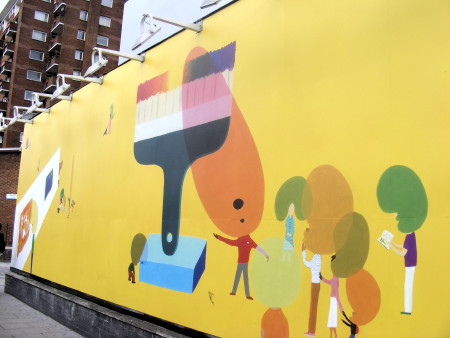 Commissioned by Art on the Underground, the large-scale work created by Peter McDonald was installed outside Southwark Underground station last month.

The work, entitled Art for Everyone, plays with the idea of transforming a public space into a place for art. McDonald, who won the John Moores Contemporary Painting Prize in 2008, has been artist-in-residence at the station since early this year.

During this time he has created a new series of paintings inspired by his discussions with station staff, visits with them to Tate Modern, and the station's role as a gateway to the theatres and galleries of the South Bank and Bankside.

Some of McDonald's paintings inspired by the daily life of the station have been turned into badges for staff and passengers to wear, making the artwork available to the community on a new, more personal scale.

"I really enjoyed spending time with the station staff and was particularly inspired by the control room which felt like a new world for me, something which really inspired my paintings," says Peter McDonald.

"I hope that the work invites the public, particularly the local community, to talk to station staff about the local cultural sites and what it was like to collaborate with an artist at work."

To get hold of one of the badges passengers just have to strike up a conversation with a member of station staff.

McDonald's artwork has replaced Cocayne by Gayle Chong Kwan which had been on show at the station since 2007.

This year marks the 10th anniversary of the opening of Southwark Underground Station and the Jubilee line extension.

On Wednesday 7 October staff at Southwark station will be raising money for local charities as part of a series of fundraising events along the Jubilee line.