Southwark man is named apprentice of the year

Tedros Hagos from Southwark - an apprentice at Fifteen Restaurant - has been named apprentice of the year at the Skills for London awards. 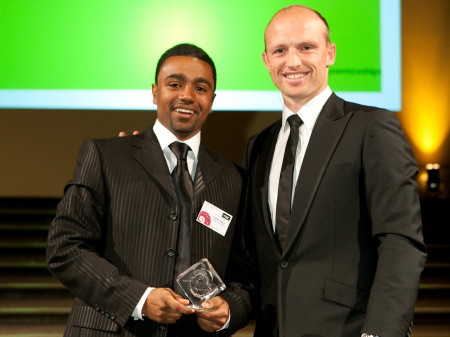 "My passion is cooking and I strive to make the best food possible for Fifteen's customers. That's why I do everything to the top of my abilities and it's why I'm always looking at ways I can improve," says Tedros Hagos

"But I'm also really committed to my team and do all I can to keep spirits high. I help teammates who are behind and support them when they have problems because I want us all to graduate together.

"With determination I know that we can all be great chefs and ambassadors of Fifteen. The apprenticeship has been one of the best things to happen to me and being chosen as the Apprentice of the Year is just the icing on the cake."

Tedros lived in Eritrea until he was three and moved to Ethiopia with his father after his parents split up. When the war broke out he moved back to Eritrea where he faced conscription on turning 18. He did not want to take part in the fighting and was jailed for refusing to join up. Not knowing how long his imprisonment would last, an army friend of his father secured his release for a high fee and he was eventually brought to England.

Tedros took part in the Tomorrow's People Working It Out project based at the Gateway Training Centre in Lancaster Street.

His enthusiasm and motivational skills led Tomorrow's People to refer him to Fifteen's chef apprenticeship programme, the charity founded by Jamie Oliver, where he went through a series of interviews and was eventually offered a place.