Shoot Experience, the people behind the popular photographic treasure hunts held at Tate Modern and Southbank Centre, have launched a new treasure map covering the South Bank, Bankside and the City. 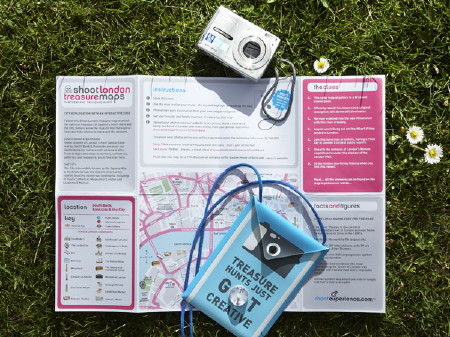 "From seeing how much fun participants have during our photography treasure hunts, we wanted to create a product that was as just as enjoyable, but that people could do in their own time," explains Brett Jefferson Stott.

The Shoot London Treasure Map comes in a neat plastic wallet with a built-in compass.

The map features seven clues that will lead participants to locations from Holborn in the west to London Bridge in the east.

The idea is fun but Londoners certainly won't find any of the clues remotely taxing. With an asking price of Ł9.95 one might expect a few more clues to be offered and the destinations to include a few more places of photographic interest off the beaten track.

Once the clues have been solved users are encouraged to take creative photographs of the various locations. Pics can then be uploaded to the Shoot Experience website.

All the images will be judged at the end of the year and prizes awarded for the most creative photos. An exhibition of the best images is planned for early 2010.

• Shoot London Treasure Maps are available from the Filmstore at BFI Southbank, the Design Museum, Golden Hinde and Southwark Cathedral or online.