Bright, colourful, refreshing. This exhibition is perfect for a hot summer's day in London. 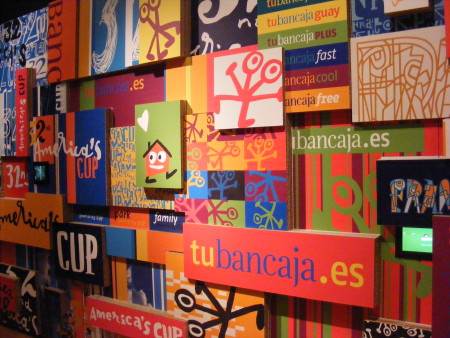 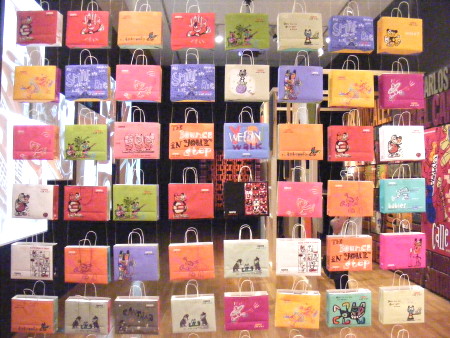 Bags for the Camper chain of Spanish shoe shops

His work most likely to be recognised by a British audience is the logo and mascot for the 1992 Olympics in his home city of Barcelona. Nearly two decades on the designs still look fresh and modern.

Despite the wealth of design talent in the city, it's hard to imagine that London will come up with such tasteful branded and sponsored goods for the Olympics when our turn comes in 2012.

The exhibition has been designed by Mariscal's own studio and the colourful, immersive presentation is a pleasing antidote to the usual white-walled gallery space.

Visitors enter through a 'shower tunnel' of 640 illustrated ideas demonstrating the designer's evolving style from 1970 to the present day.

I particularly liked the wall made up of characters from typefaces designed by Mariscal.

Mariscal's graphic design for publications including The New Yorker and Spain's El Pais Semanal magazine is also well-represented, as well as a range of carrier bags for Spanish shoe chain Camper.

The whole exhibition exudes joie de vivre and it is hard not to be enthused and inspired by designs that are stylish without being at all pretentious and fun without being patronising.

Mariscal is also due to create a mural to adorn the exterior of the Design Museum – follow progress at www.mariscaldrawinglife.com