Park Street's Borough Cafe is set to close this summer as the owners are forced out by rising rents in the trendy Borough Market area. 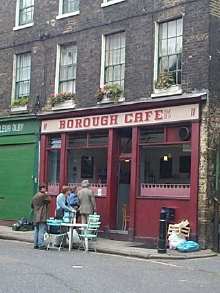 Maria Moruzzi and her family have entertained actors and film crews for more than 40 years at the cafe which has been seen in dozens of movies and TV dramas filmed in the historic section of Park Street.

Moruzzi, 45, told Teletext's TV Plus: "Our business is under threat from the expansion of London Bridge and the astronomical rents.

"We can't afford to keep going with a small business like this. It's a shame but times change and I'll be opening a market cabin nearby."

"Sean Connery had the pleasure of meeting me when they made Entrapment in the street. I cooked him an omelette and salad.

"We're in an epsiode of The Bill later this year for the third time. Jamie Oliver likes it in here. I've also had Danny Baker and Nigel Lawson, the former Chancellor."