Elitism and a lack of focus on careers in schools mean that bright young people are shut out from professional jobs claimed Alan Milburn MP launching his Fair Access to the Professions report. 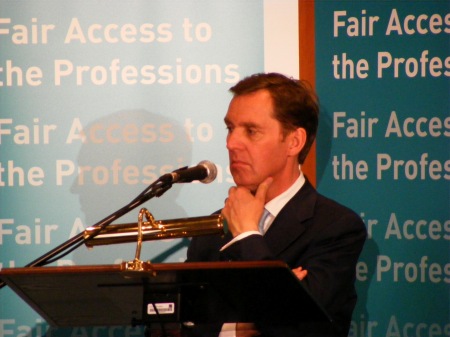 The former cabinet minister, who has chaired the Professions Panel, was speaking in the Counting House at King's College Guy's Campus on Tuesday.

Unleashing Aspiration, the final report of the Panel on Fair Access to the Professions, concludes that without action to address Britain's 'closed shop' mentality, tomorrow's generation of talented young people will miss out on a new wave of social mobility.

"The Report recommends how the professions, the government and others can unleash the pent-up aspiration that exists in the young people of our country, announced Mr Milburn. "Not everyone can be a doctor or a lawyer, and not everyone will want to be, but those with ability and aptitude need a fair crack of the whip to realise their aspirations."

He highlighted evidence given by the Head Master of the City of London Boys School who in answer to the question 'What is the difference between independent and state schools?' replied "extra curricular activities".

"Every state school should have extra curricular activities and Ofsted should report on the school's performance," declared Mr Milburn. "We are not interested in levelling down. What we are interested in is levelling up."