Greater London Authority staff joined in 'feeding' an actor dressed in a chicken costume in Potters Fields Park during a protest over job cuts on Tuesday. 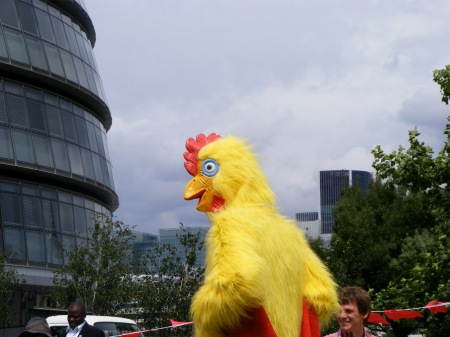 The chicken outside City Hall 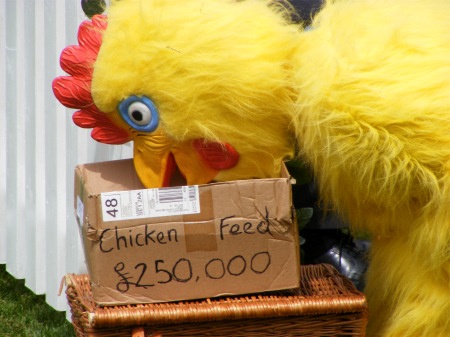 A box of 'chicken feed' was presented to the bird

"The GLA staff are clucking mad after the mayor described his £250,000 salary for his second job as a Daily Telegraph columnist as 'chicken feed'" said a UNISON spokesperson.

"Currently 120 staff are being threatened with redundancy, despite warnings from workers that downsizing City Hall would mean downsizing life for Londoners."

A majority of the 350 union members at City Hall has voted in favour of industrial action and more than 75 workers left their desks to join in the lunchtime picnic protest.

A chicken run was fenced off for the chicken and a band.

Earlier UNISON regional officer Shirley Mills said: â€œLeo Boland, the GLA Chief Executive, is also £10,000 more than the Prime Minister. It is disgusting that these two wallow in their huge wages while low paid staff face the axe.

The City Hall demonstration was the first in a series of events leading up to a rally in October.