A New World: A life of Thomas Paine at Shakespeare’s Globe

This late summer production at the Globe of a new play by Trevor Griffiths is a thoroughly enjoyable panorama of the life and times of Thomas Paine, an early campaigner for democracy, anti slavery and the rights of man. 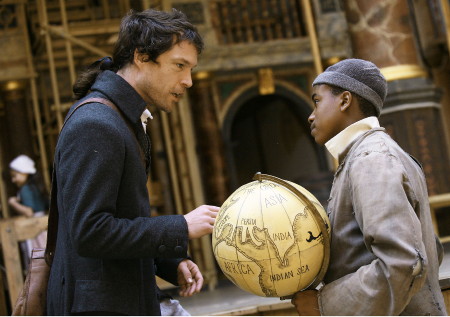 Two new leads from outside the Globe company did well: John Light plays Thomas Paine himself – with passion and dignity – and Keith Bartlett as Ben Franklin, who acted as a narrator, even well after he should have died. The character list bristles with American and French revolutionary heroes-Sam Adams, Jefferson, Gen Washington, Marat, Danson, Lafayette. The brief mention of William Blake reminds us that many of the early English revolutionaries lived, debated and published very close to Bankside.

The first half of the play takes Paine far from his birthplace in Thetford, Norfolk to Pennsylvania. He immediately begins work with a radical publisher, editing a journal and pamphlets. We see the inexorable way in which pleas for freedom and the rights of 'Americans' are crushed by the British troops sent in by the English king. He wrote from the heart with a passionate desire for truth. His nickname was 'Common Sense'.

In the second half another revolution is underway, this time in France, and Paine is in Paris. Here his respect for human life is nearly his undoing as he pleads for the life of the French king, Louis XVI. At the end of the play he returns to America and settles in NY state, where he was given land and a ranch with grateful thanks in recognition of his work on framing the American Constitution.

The story is complex and multifaceted. Griffiths tells the tale in big segments, aided by new songs by Stephen Warbeck in an attractive folk song style. There are many resonances with the politics of today and I was left wondering where the integrity of Thomas Paine can be found in modern politics.