Young people from Woolwich Mosque witnessed a live public performance of 'Boy X' on the concourse at Waterloo Station on Tuesday morning as part of London Week of Peace. 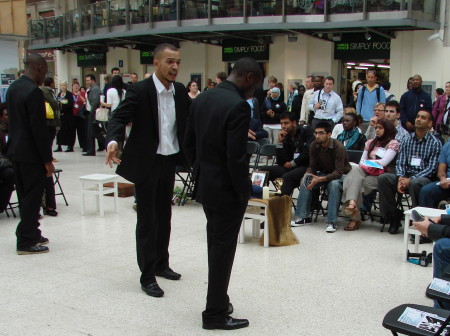 The hour-long play, which explores weapon-carrying, gang culture and violent crime, was performed by a group of four young actors and is based upon their experiences of living on gang-dominated estates.

"I am delighted with British Transport Police's bold initiative to stage a full length performance of Arc Theatre's powerful anti-knife crime play 'Boy X' on the Waterloo Station concourse as part of the London Week of Peace," says Carole Pluckrose, CEO of Arc Theatre."We believe that this has never been done at a station before!

"Our four young actors, who have personal experience of life on gang-dominated estates, were excited about reaching out to as many passengers and passers-by as possible because they are passionate about communicating our message that the urgent issue of young people, gangs and knives is all of our responsibility.

"This is a powerful call to action for business people, educators, young people and the community as a whole to take a lead in projects that will support those involved and rid our streets of these senseless tragedies."

Superintendent Jim Little of British Transport Police said: "Weapon-related crime, although rare on public transport, affects both victims' families and their communities and that is why we have a duty both to the victims and the public to take a tough approach to those who are caught carrying knives and to protect the vast majority of people who don't."