TfL’s warning to cabbies: too many taxis at Waterloo Station

Transport for London has warned taxi drivers that they risk being fined if they continue to queue to join the Waterloo Station taxi rank beyond the designated area. 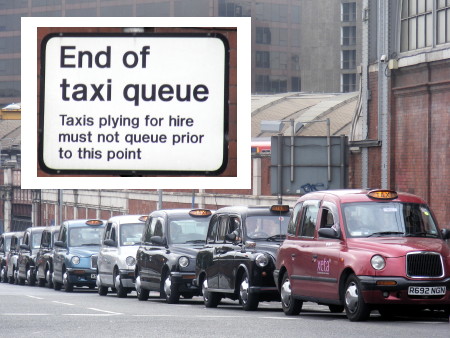 14 taxis were queueing beyond the official limit on Wednesday afternoon

Transport for London's traffic enforcement officers will be spending time at the taxi rank at Waterloo Station over the next couple of weeks to observe and remind drivers about the rules they must follow when using designated taxi ranks.

TfL says that an increasing number of taxis have been seen lining up beyond the designated area at Waterloo Station.

We did a spot check on Wednesday afternoon and found 14 taxis queueing on the wrong side of the notice marking the limit of the waiting area.

According to TfL he line of cabs has been seen to extend onto Addington Street and, on occasion, even around the corner onto York Road.

Over-ranking can have a significant impact on traffic congestion and, in the case of Waterloo, has also caused disruption to bus services.

"We appreciate cabs lining up at this rank are doing their best in the current financial situation to ply their trade but over-ranking at Waterloo is causing problems for buses and other road users," says John Mason, TfL's director of taxi and private hire.

"Rather than just start issuing penalties, I have arranged for traffic wardens to spend time on street for the next couple of weeks to remind drivers of the importance of sticking to the designated rank.

"By going down and speaking to the regular users of this rank, I hope the need to issue penalties to taxis can be avoided."

Wardens will be monitoring the taxi rank and surrounding streets at Waterloo Station up to 12 October to inform drivers committing offences that penalties are likely to be issued to drivers who continue to stop their vehicles outside the taxi rank area after this date.