Gwen Southgate has made her first visit to Waterloo since the publication of her Coin Street Chronicles book in the USA last year. 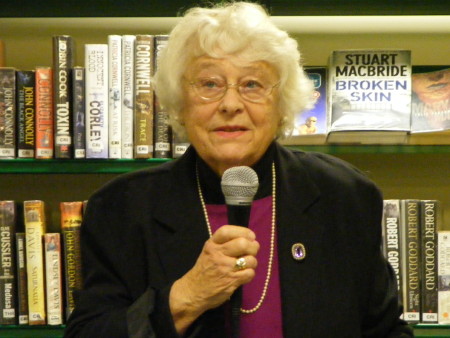 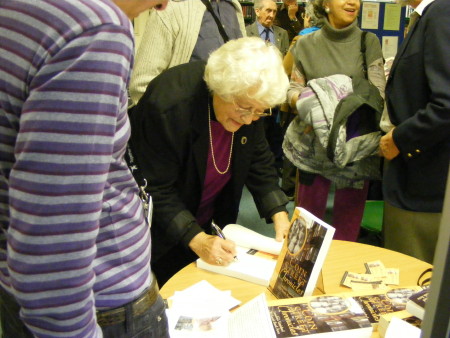 The author signs copies of her book

The author's talk at Waterloo Library marked the British launch of her book which tells the story of a childhood and teenage years living at various addresses off Stamford Street during ther 1930s.

"I am just delighted to be in Waterloo Library," she told the audience. "It's so special to be back in Lower Marsh where I so often came shopping with my Mum."

80-year-old Gwen was specially pleased to be speaking at the library since her mother had once said: "The public library is not for the likes of us." She was afraid of running up fines which the family could not afford but young Gwen was left for years under the impression that the then library, now the Waterloo Action Centre, was only for posh people like 'public schools'.

"Later I was sad and angry at all the reading I had mised out on," said Gwen.

During her talk, the author recalled Waterloo's main market being in The Cut where there were not just vegetable stalls but fresh rabbits, chickens and fish on sale. She was fascinated by the live eels.

"But I was very scared of Mr Hood at Hood's sweet shop in Cornwall Road as he had a missing hand," she added.

Major events in her childhood included the very serious fire at the Eldorado cold store behind the Oxo Tower when the air was filled with the smell of roasting meat.

Gwen and her husband David have lived in America for the past sixty years so the book was begun without knowledge of modern Waterloo.

Its title had already been chosen by the time Gwen discovered that Coin Street was now a famous name in Britain following the formation of the Coin Street Action Group in 1977 and later the Coin Street Community Builders.

"There was a generosity people had despite being poor and having hard lives," observed Gwen. "People were cheerful and generous."

But she added: "Everyone in Waterloo expected to be poor."

Present in the audience was Bertram Coot from Ayres Street who surprised Gwen by greeting her as "Gwennie Redfearn". They both lived in Coin Street during the Thirties.