Giant duck house on the Thames in Bonfire Night stunt

A super-sized duck house resembling the one in the garden of Sir Peter Viggers MP was towed up the Thames to the Houses of Parliament on Thursday afternoon. 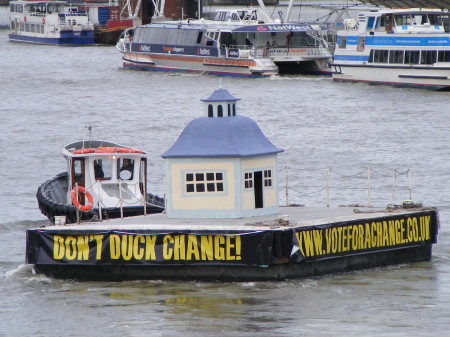 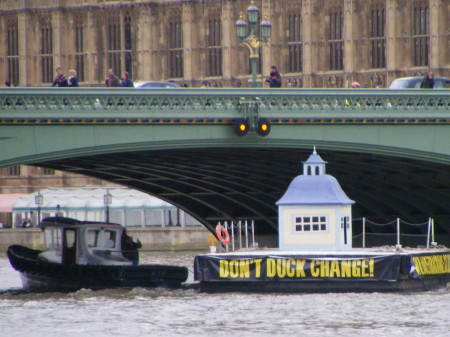 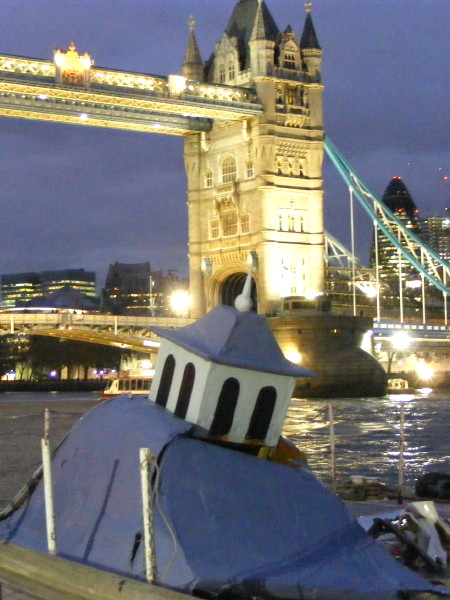 The replica was part of a demonstration organised by the SE1-based 'Vote for a Change' campaign.

"Sir Peter Viggers' Duck House has come to epitomise the absurdity of the expenses crisis," said spokesman Willie Sullivan, speaking at the campaign's Chancel Street office. "Today's protest illustrates how nothing has changed, and nothing will change, until voters can change the way we elect our MPs. This is why we need a referendum on the voting system on election day."

The campaign claimed that as the duck house arrived outside the House of Commons there were MPs inside plotting to 'duck out' of Sir Christopher Kelly's expenses recommendations on claiming for mortgages and employing relatives.

Despite the unseasonally warm weather, MPs appeared to be showing solidarity by staying away from the terrace during the demonstation.

The raft carrying the duck house set out from Butler's Wharf shortly before 3pm accompanied by 'ducklings' – a small speed boat with people wearing duck masks. Throughout the journey the flotilla was shadowed by the Port of London Authority Harbourmaster's launch to ensure that a threat to set fire to the duck house opposite the MPs' terrace was not carried out.

Being 5 November the demonstrators had originally planned a fireworks display to accompany the 'bonfire'.

However, after twice passing the Palace of Westminster, the boats were escorted downstream back to Butler's Wharf Pier.

Attempts to set alight to the duck house at the Butler's Wharf Pier were foiled by staff whose fire hoses caused the structure to collapse as darkness fell across the Pool of London.

The duck house, the size of a beach hut, was made at two weeks' notice at an art studio in Camberwell.