Plans for supermarket and apart-hotel in Lower Marsh

Plans have been unveiled for a supermarket in the former language school at the south end of Lower Marsh. 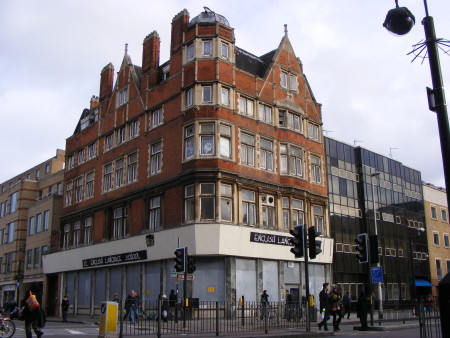 There has been a pub on the corner of Lower Marsh and Westminster Bridge Road since the 18th century. The present Victorian building was known as the The Dover Castle pub until the mid 1960s.

It became a language school in 1996. Last year it was occupied by squatters from the Oubliette Collective who briefly opened an art gallery and cultural centre.

Both the pub and the language school used the upper floors for accommodation and the developers intend to refurbish those floors as 28 serviced apartments let for two to four weeks at a time.

Kevin Goodman from CgMs planning consultants told a Waterloo Community Development Group meeting that his clients will be submitting a planning application to Lambeth Council later this year.

Architect Hari Phillips told the meeting that the building would be restored with a new fascia at ground level to complement the cleaned Victorian brickwork above.

Although an extension next to 1 Lower Marsh would not be in the Victorian style, Mr Phillips said the frontage plans show brickwork with stone window surrounds.

Mr Goodman stressed that although initial discussions had been held with some supermarket chains including Costcutter no decision would be made until after the planning stage had been completed.

The meeting welcomed the possibility of an active frontage on the street.