Van Doesburg and the International Avant-Garde at Tate Modern 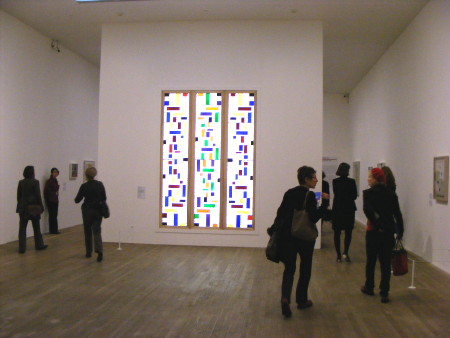 Van Doesburg and the International Avant- Garde: Conducting a New World looks at the radical artist in his roles as painter, architect, designer, typographer and publisher.

The first room has 'Composition 1 (Still Life) 1916' which looks like a Christmas tree but is possibly a turning point as an early example of his 'geometric abstraction'. 'Tree' in the same year is trees within a tree.

Examples of stained glass include his large 'Stained-glass Composition IV for the De Lange House, Alkmaar 1917'. This is either based on his 'Female Nude with Hand on Her Head' in another room or, according to some, Bach's fugues.

It is exciting to find that this towering figure designed a Gouda cheese label which has been likened to his stained glass. There is also a salad oil poster.

A cabinet includes a rare photograph of the artist and his wife along with black and white pictures of van Doesburg's own exhibition at Landesmuseum at Weimar over Christmas 1924. In one photograph you can see the original Leeuwarden Monument model which has been reconstructed and included in this 2010 exhibition.

Souvenirs on sale in the shop on the same level 4 include a van Doesburg typeface tea towel (Ł7.50) and a stained glass design badge (Ł3.50).