A fast food restaurant owner and his company have been fined £7,800 following a prosecution by Southwark Council's food safety team. 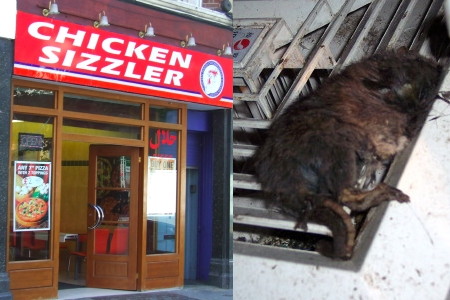 Officers visited Chicken Sizzler at 128 Tooley Street on 19 August 2008 and discovered not only that it was infested with rats and mice but that food was being prepared in filthy conditions and that there was an inadequate hot water supply.

The restaurant, at the time owned and run by Atiqallah Hassan, was closed down in August 2008 but was allowed to re-open after action was taken to remove any imminent risk to health.

Following the closure of the business Mega Pizza & Chicken Limited and Mr Hassan as company director were charged with 19 food hygiene offences each.

Among the findings of the food safety team during their inspection was a dead rat infested with maggots in a room adjacent to the food preparation area.

At hearings at Camberwell Green and Tower Bridge Magistrates Court last year, Mr Hassan and the company each pleaded not guilty to 10 charges, having already entered a guilty plea to 9 offences at an earlier hearing.

At the trial in February 2010 at the Inner London Crown Court the jury found in favour of Southwark Council and returned unanimous guilty verdicts on all 10 counts against the company and the company director.

A prohibition order was also granted by the court which prevents Mr Hassan from participating in the management of any food business until 4 March 2012.

"We can't stress enough how important food safety is in our borough, and prosecutions like this help send out a clear message that we won't tolerate restaurants and food outlets breaking the law and putting the health of the public at risk," says Cllr Linda Manchester, executive member for community safety.

• In 2009 the business was taken over by a company unrelated to Mr Hassan.