A group of young artists are running a series of free workshops and events for young people this month at a disused travel agency on Harper Road. 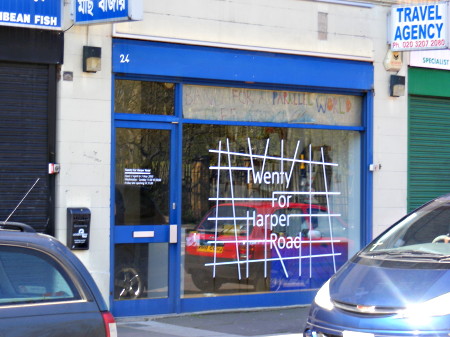 The site has been transformed into a temporary project space called Twenty For Harper Road, giving over 20 young artists, architects and musicians a place to run free activities aimed at 15 to 23-year-olds, ranging from themed walking tours to a zero-calorie dining experience and moustache-making.

"It's an opportunity for young people to come along and be involved in something interesting, exciting and fun that they wouldn't experience in school or at a gallery," said co-organiser Roger White from Raw Canvas, the young people's collective abased at Tate Modern.

It's the first time the group has been given the opportunity to design and build their own space, having previously worked in the Tate's gallery space, Turbine Hall and cafe, and it's also the first time the Tate has set up an offsite project space.

"We've tracked down the space and renovated the inside," said Roger. "It's an experiment. If it's fun and successful and we get lots of young people coming along, we'll be looking to do another one."

The space is open Wednesday to Sunday from 11am to 6pm, with late opening until 9pm on Friday nights, and there is a different activity taking place each day.

The initiative was launched on 2 April and will run until 3 May at 24 Harper Road, SE1 6AD. For more details visit www.twentyforharperroad.blogspot.com