Solicitor-General Harriet Harman appeared in SE1 this week at a Tate Modern launch for the new project fones4safety, a combination recycling and community support programme. 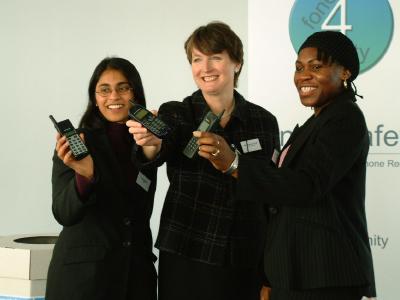 The project emphasises recycling of old mobile phones through reconfiguration to aid victims of domestic violence and other vulnerable parties. The partnership is working to configure mobiles as personal alarms which immediately dial the Metropolitan Police when any button is hit. The phones will be marked internally so the police will know exactly which mobile is calling.

Anderson says the one year pilot scheme, funded by the government's Single Regeneration Budget (SRB) and distributed by the London Development Agency and Elephant Links Partnership, will initially encompass the small development area around Elephant and Castle. However, the venture will eventually include the entire area from Bankside to the Elephant.

CRISP expects to collect 4,000 phones as a low estimate and hopes to reconfigure at least 400 or 10% of the collection. Detective Chief Inspector Ashley Sharp of the Metropolitan Police said this would be a great improvement since the police at present have access to less than two dozen phones at this point. Anderson says the project hopes to have at least 30 more mobiles configured by May.

In her keynote speech, Harriet Harman stated that one in four violent acts in the Southwark area are domestic in nature. "No one agency, public or private, can handle this," she said, urging new individuals and businesses to become involved with the project.

• Phones can be dropped at Walworth Road or Borough High Street Police Stations
• Up to three phones can be sent by FREEPOST to CRISP, FREEPOST LON15948, London SE17 1BR
• Large collections can be arrangedd by calling CRISP at 020 7740 6533