Joe Turner’s Come and Gone at the Young Vic

A sensitive and well-observed portrayal of the everyday lives and internal struggles of early twentieth century African Americans. 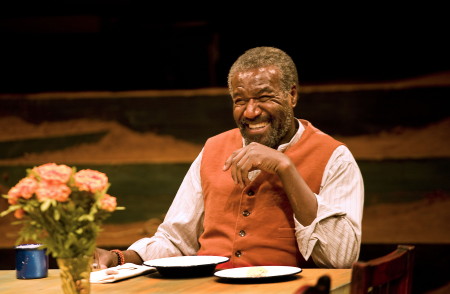 This is the play that Obama took Michelle to (at the reputed cost of $24,000), fulfilling a promise made during the Presidential election campaign to take her on a date to a Broadway show. Critically lauded when first performed on Broadway in 1988, and written by two-time Pulitzer Prize-winning playwright August Wilson, Joe Turner's Come and Gone comes with certain expectations.

The second in Wilson's ten play 'Pittsburgh Cycle', a decade-by-decade exploration of the experience of African Americans through the twentieth century, time and place are imbued with extra meaning. Set in 1911, during the decade that witnessed the start of the Great Migration, when millions of African Americans departed the South and travelled to America's other three corners, its location is a Pittsburgh boarding house in which a disparate collective of characters have been brought together through a mix of coincidence and fate. Nearly a half century has passed since the signing of the Emancipation Proclamation, but the spectre of slavery still hangs heavy (and the audience is ever aware that it will take many more decades for African-Americans to achieve freedom and equal status).

Whilst undeniably a production that seeks to explore and portray the epic struggle of millions of African Americans, it is its portrayal of the everyday that dominates, convincingly and subtly conveying to the audience the ever present discrimination and prejudice. The action takes place almost exclusively in the kitchen, in which the cast of (mostly) lone individuals come together with common cause. They may be struggling, individually and as a collective, to find their place and standing in society (or their 'song', as conjurer Bonham would say), but in Seth and Bertha's boarding house there is a feeling of welcome and respite.

Yet all is not well – and this is most visible in the tormented figure of Herald Loomis, a man haunted by his experience of having been captured by the eponymous Joe Turner (a plantation owner who captured freed slaves for his chain gangs). The scene in which Loomis appears possessed (the culmination of Act One) comes almost out of the blue and is extremely uncomfortable to watch (but fantastically acted).

Performed in the round, the stage surrounded by tiered seating, all covered by heavy, thick red soil, the audience mentally prepares to watch what is feared will be a bloodthirsty spectacle. Yet, despite the blood-infused heritage which inspired the play, Joe Turner's Come and Gone is subtle and non-sensationalist, the characters endearing and engaging, and one is left with a feeling of hope for their future.