Campaigners from the charity ActionAid have asked shoppers at Asda in Old Kent Road to give 2p back to the supermarket to show the store's bosses they can afford to pay higher wages to workers in the developing world. 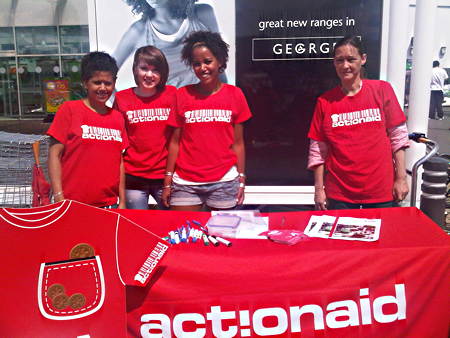 ActionAid volunteers outside the Asda store in the Old Kent Road campaigning for a living wage for garment workers in Asia. (Photo: Lotty Reynolds/ActionAid)

The protest, which took place at the Old Kent Road Asda, is part of ActionAid's campaign against Asda which is targeting stores across the country. The charity claims that the supermarket's suppliers have a "lamentable record" for paying low wages to factory workers in Asia.

ActionAid recently published research which shoes that if Asda's suppliers paid workers an extra 2p out of the cost of a Ł4 T-shirt then it would double the workers' wages.

A group of five campaigners collected 216 two pence coins from Old Kent Road shoppers and presented them to managers at the store on Saturday.

"Asda claim to be a family friendly business but there's a dark side to this company, and that's the way they treat the factory workers who make the clothes they sell," says ActionAid campaigner Lotty Reynolds.

"These women in India, Bangladesh and other Asian countries struggle to feed their families despite working long hours in terrible conditions.

"The 2ps we collected from shoppers is money which by rights should be going to pay those workers a living wage. By giving the money back the customers have shown that if they can afford to return such a small sum then so can Asda. It's the UK arm of the US chain Wal-Mart, and they make Ł45 million profit every day.

"The people of south east London showed they want to make fashion fair. Now it's high time Asda did too."

Asda says that it has been in dialogue with ActionAid for some time and does not accept the findings of its recently published report entitled Asda: Poverty Guaranteed.

"We've been saying to ActionAid since they released it that this a flawed report," an Asda spokeswoman told the London SE1 website.

"The idea that charging 2p more per garment would mean workers earned 2p more is disingenuous. Experts who understand the issue know that the situation of workers in the Asian sub continent is served best by intelligent action that improves factory conditions in a structured and sustainable way.

"Our pilot project with another NGO, GTZ, has already resulted in a 14.2 per cent increase in wages in Bangladesh and it is our firm intention to roll out this innovative project out to all our suppliers in the coming months and years.

"We know that its actions, not words, that will help alleviate poverty, and we firmly believe the measures we've put in place in Bangladesh will not only lead to higher wages, but also improved working conditions, fewer working hours and a more highly skilled workforce.

"We remain ready and willing to take ActionAid with us to Bangladesh so they can then see first hand the positive impact we're having there."