Plans for a large Conran-designed student hall of residence on Great Suffolk Street moved a step closer to reality after councillors voted to lift a restriction that limited the use of the buildings to the London School of Economics. 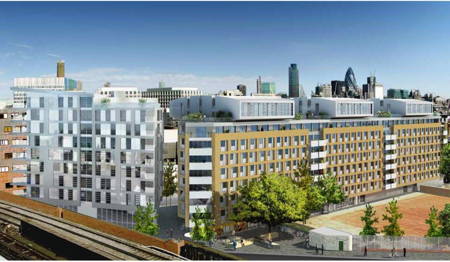 Last November Southwark Council's planning committee approved the plans by Q Developments for the Conran & Partners-designed scheme known as Moonraker Alley at the junction of Great Suffolk Street and Pocock Street, immediately to the south of Blackfriars Crown Court.

At that stage the London School of Economics was expected to enter a contract to use and run the new residence, and the committee was given assurances by the LSE about the nature of its student body and the management of its residences.

The planning committee imposed a requirement in the section 106 agreement for the development that restricted the proposed student accommodation to the LSE or another institution approved by the council.

The deal between Q Developments and the LSE subsequently fell through, so Q Developments applied to the council to have the restriction lifted so that students from a range of universities and colleges can occupy the accommodation, which would be managed by a specialist student housing provider.

The latest application was considered by Southwark's planning committee at the town hall on Wednesday night.

Objector Luke Franklin, a local resident since 2008, addressed the committee to stress the need for well-mixed communities, and that when taken in conjunction with the recently completed Unite development, the Moonraker Alley scheme would bring the total student population of Great Suffolk Street to almost 1,000.

He described the proposed development as "the equivalent of building a very big youth hostel in a relatively quiet street," emphasising that the students – being from disparate institutions – would lack cohesion and community.

"Despite the economic downturn, we are confident that this scheme can be developed," Jim Thomas of Q Developments told the committee.

He said that building work would start in the next couple of months and the scheme could be complete in time for summer 2012.

He explained that despite the failure of the LSE deal, demand for student accommodation in London remains very high.

The scheme was originally conceived as a residential development and was only changed to student accommodation when the former proved not to be viable.

Planning consultant John Foddy of King Sturge told the committee that he believed that the scheme's design had benefitted from the protracted process.

"It was a good building before; now it's an exceptional building," he said.

Cathedrals ward councillor Geoffrey Thornton addressed the meeting to highlight the growing pressure on Borough and Bankside from large-scale developments of student accommodation.

He said that Southwark has the second highest number of student schemes in development, and the percentage of students among the population in Cathedrals ward is well above the national average.

"We have, I feel, reached a point where we should think very carefully about where we allow these schemes to develop and who they are aimed at," he told the committee.

The application was approved unanimously by members of the planning committee.