Musician Nick Franglen spent all of Thursday - from midnight to midnight - underneath the north side of London Bridge to create a 24-hour piece of improvised music. 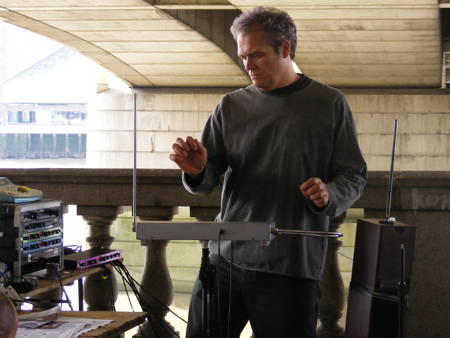 Thousands of pedestrians crossing the bridge between Southwark and the City unwittingly 'collaborated' in the composition using sensors that interrupted the music every time someone walked past.

From his performance space tucked under the northern arches of the bridge, Franglen played Theremin through a series of looping effects and delays to provide long, complex washes of sound.

The Theremin is an early 20th century Russian electronic instrument which is played without contact. The player moves his hands in the space around the instrument's antennae to produce notes of varying pitch.

Cinematographer Bevis Bowden, who has recently collaborated with John Cale on his audio-visual installation for the Venice Biennale, has filmed the performance of Hymn to London Bridge which will be screened in edited form at The Scoop during The Mayor's Thames Festival weekend.