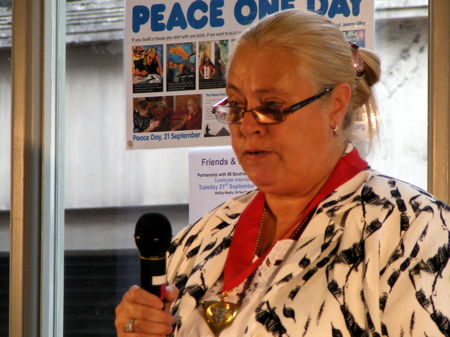 The deputy mayor, who was speaking at an International Peace Day celebration at the Ability Media Centre in Southwark Bridge Road, said: "This gathering is a public declaration of our joint commitment to building a stronger, safer and more cohesive community."

The gathering, which the slogan 'Peace within ourselves/Peace within our Community', was organised by the Friends & Neighbours Club at Blackfriars Settlement in partnership with Ability Media.

"Community cohesian is about different ways of being a human being," said Southwark Council's community cohesion coordinator Michael Cleere. "Everyone has something to contribute when it comes to cohesion."

Among those appearing were Terry Franklin, known as Terry the Poet, whose poem 'You are going to do great things' was printed in the programme. A rap was performed by RaPid MC Darrell Seales.

Earlier the nearby British School of Osteopathy gave a demonstration of treatments available.

International Peace Day on 21 September was established by the United Nations in 1981.

Other International Peace Day events in SE1 included a Charities Parliament discussion at Church.co.uk featuring Tony Benn and Paul Flynn MP. The event is now available as a podcast.