Tate Modern's Gauguin show, the major winter exhibition which may break attendance records, has opened for a three and and half month run. 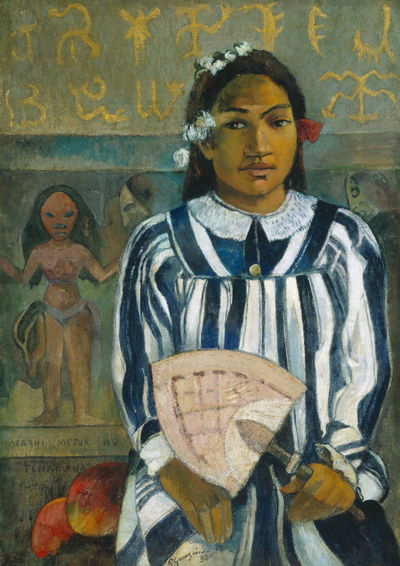 Paul Gauguin's work is not presented in chronological order but divided into ten sections with a focus on such areas as drawings, sacred themes and landscapes.

Especially interesting are the two galleries devoted to Paul Gauguin's background and the places he knew. His grandmother, born in the 18th century, is revealed as a socialist and feminist who liked travelling.

Her grandson also made unusual trips and there are delightful examples travel posters which tempted Gauguin's generation to explore.

Here too are mid 19th-century examples of religious material such as coloured hand blocked wood engravings of a Corpus Christi procession and the patron saint of Brittany. Although claiming to be against the Church, Gauguin was not opposed to religion.

The Yellow Christ is based on a sculpture in a chapel outside the village of Pont-Aven. This is displayed with his other great religious paintings including The Green Christ and Vision of the Sermon.

There are postcard views of Pont-Aven. He loved Brittany and Pont-Aven was important to him so the background section has contemporary photographs showing women at ease in their regional Breton dress. A copy of an 1892 L'Illustration depicting one such girl holding a candle is placed next an Illustrated London News with a similar picture.

"When my clogs resonate on this granite ground I hear the muffled and powerful thud that I'm looking for in painting," he wrote in 1888. In the main gallery Gauguin's clogs are on display and there are objects featured in pictures such as the wooden Norwegian tankard in Clovis Asleep.

There are of course many pictures of women lying down but this exhibition has much more than the famous Tahitian work. Gauguin was a sculptor making even his own house fascia.

The Tate shop has possibly one of the largest number of souvenir items of any recent major exhibition. There is a Gauguin teapot, tea towel, Christmas baubles 'hand painted in India', a choice of tote bag and even a hand knitted puppy as seen Still Life with Three Puppies.

Gauguin: Maker of Myth is at Tate Modern until January before being shown at the National Gallery of Art in Washington.