Martin Lavell newspaper distributors has been refused permission to demolish its warehouse in Rushworth Street despite having planning permission for a replacement structure. 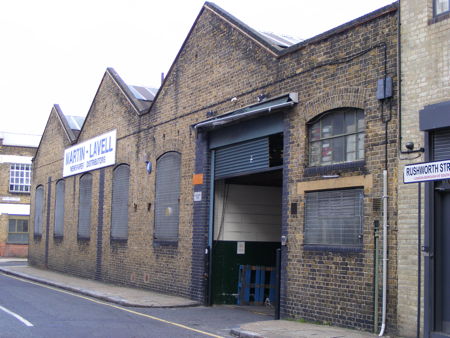 A four-storey building to include nine residential units on the site received the go-ahead in 2008. However, work did not proceed and since permission was granted a new King's Bench Conservation Area has been established.

Although planning permission remains valid for a further year, the creation of the conservation area means that separate permission is now also required for demolition of the warehouse known as Newspaper House.

"This project is a culmination of five years really really hard work," owner Margaret Lavell told the Borough & Bankside Community Council on Monday evening. "It is not all about money and gain but to be absolute quality."

Referring to her husband Tony, who was found dead fifteen years ago this month, she added: "This is in memory of my husband whose life was taken within the building."

English Heritage opposed the demolition of Newspaper House on the grounds that the early 20th-century building made a "positive contribution to the character and appearance of the conservation area". There were four local objectors who welcomed the conservation area designation.

"This is a very unusual scenario in front of us tonight," commented community council chair Cllr David Noakes.

The debate mainly involved consideration of whether, under a new government planning policy statement concerning the nature of heritage assets, there was a compelling case for demolition. Just after 11pm councillors voted 3 to 2 to accept the planning officer's recommendation that consent to demolish should be refused.

It is understood that the applicant may consider an appeal to clarify the policy.

The community council was meeting as the planning authority at the Ability Media Centre in Southwark Bridge Road.