Plans to turn one of the former British Airways supersonic jets into a floating tourist attraction on the South Bank are "very much alive" insists the architect working on the scheme. 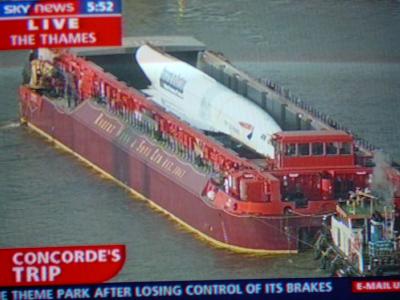 Concorde on the Thames in 2004

Geoff Mann of RHWL Architects wrote to The Independent last week to refute a claim by the paper's travel editor Simon Calder that the proposal is "dead in the water".

"About 12 months ago, I was approached by senior members of Club Concorde suggesting the South Bank would be a splendid place to bring Concorde from Heathrow airport," says Geoff Mann.

"As an architect with more than 20 years' experience working at County Hall and on other South Bank projects, the Concorde members sought my advice.

"The idea of two of the most stunning pieces of engineering of the 20th century – Concorde and the London Eye – being side by side seemed a wonderful idea and remains so.

"I suggested that the plane soaring above the river and accessible from the Queen's Walk could be stunning, and for the past nine months, key authorities have been extremely helpful and offered expert advice."

Mr Mann added that the project impact on tides, river traffic and marine life still needed to be fully assessed and several months' work would be required before a planning application can be made to Lambeth Council.

He continued: "We hope soon to produce images which depict G-BOAB alongside the Eye in a configuration which takes into account all the technical advice we have so far received."

It is six years since one of the supersonic jets was last seen on the Thames.

One of the planes was floated through London on a barge en route from Heathrow to the Museum of Flight near Edinburgh.