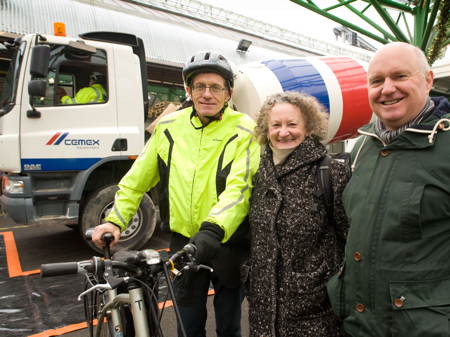 The event in the Jubilee Market enabled cyclists to drop by for a variety of activities including the chance to sit in the cab of an an LGV (large goods vehicle) and find out where they need to be positioned on the road to stay safe as well as the opportunity to get their bikes checked by expert mechanics.

The vehicles were provided by Keltbray and CEMEX whose tipper trucks and cement mixers are a familiar sight on local streets.

"It's crucial to make the roads safer for cyclists to encourage more people to take it up and ensure cycling becomes more mainstream," says the Green Party's Jenny Jones AM.

Cllr Barrie Hargrove, Southwark's cabinet member for transport, environment and recycling, added: "It's great to see everyone working together towards a common goal and helping to achieve a critical mass of cyclists on the road."

Lib Dem councillor James Barber, who is a keen cyclist, described the experience of sitting in the cab of a tipper truck and learning about how little the driver can see as a "real eye opener".

The event was coordinated by Better Bankside in partnership with Southwark Council, Metropolitan Police, Mace, Keltbray and CEMEX as part of a wider programme to reduce the risk of (potentially fatal) accidents involving cyclists and lorries.

Two cyclists died in collisions with lorries on the streets of SE1 earlier this year.

Mace is working with Southwark Council to train lorry drivers delivering to their London Bridge Place development site next door to the Shard.