Waterloo subway poem to be restored

After a year-long campaign, London's largest public art poem - which was painted over last autumn by Network Rail - is about to be restored in the underpass that links Waterloo Station to the BFI IMAX. 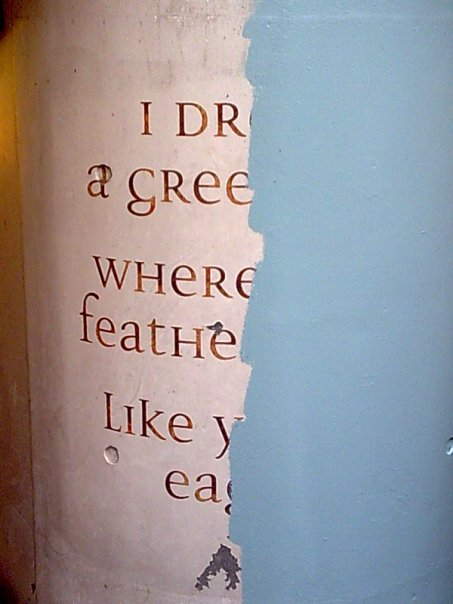 Ten years ago the Arts Council and the BFI commissioned the poet and art critic Sue Hubbard to write a poem for the underpass that leads from Victory Arch at Waterloo Station to the BFI IMAX.

Written in a series of three-lined stepped stanzas the poem was set out so that it could be read whilst walking through the tunnel. Using the metaphor of Eurydice descending into the underworld it aimed to make walkers feel safe.

As well as the classical myth, the poem's imagery makes reference to London's river history and to the famous Waterloo Station clock.

In October 2009 the poem was obliterated as part of a refurbishment of the tunnel.

Sue's publisher, Christopher Hamilton-Emery of Salt Publishing, began a Facebook campaign. More than 1200 people signed up demanding the restoration of the poem.

With the help of a volunteer lawyer and treasurer from the Facebook campaign, it was possible, after protracted negations, to get Network Rail to agree to its reinstatement.

Ł1,000 was raised on Facebook and the rest of the money is being donated by risk management software provider Neural Technologies.

A year on, the poem will be reinstated in the original font but will be executed in a different colour because of the new background paint now in the tunnel.

Restoration is being undertaken by James Salisbury of the City and Guilds Art School.

"This has been a triumph for popular opinion," says Sue Hubbard.

"This much-loved and much-read poem – London's largest public art poem – is being put back by public demand due to the persistence of those who believe in the role of poetry and public art."